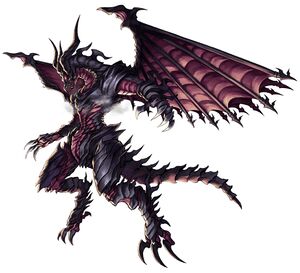 Bahamut is a large dragon that appears in many Final Fantasy games, and it first appears in Final Fantasy. Since Final Fantasy III, Bahamut has been a recurring summon throughout the series, but often has to be fought as a boss before it can be obtained. Bahamut is one of the most prominent summons in the Final Fantasy franchise, and is the titular character of two spinoff games, Bahamut Lagoon and Blood of Bahamut. Bahamut's signature ability is Mega Flare, in which it exhales a powerful magical blast at every opponent.

Bahamut's name originates from an aquatic creature in Arabian mythology. He is also based on the Bahamut from Dungeons & Dragons.

In Final Fantasy, Bahamut is found at the Cardia Islands. If the Warriors of Light retrieve the Rat's Tail in the Citadel of Trials, they can return to Bahamut to have each of their classes upgraded. Starting with the Final Fantasy I & II: Dawn of Souls remake, Bahamut has a dark counterpart, Dark Bahamut, who is found in the Lifespring Grotto. 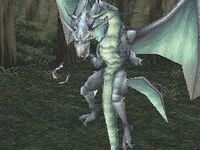 In Final Fantasy III, there is a Bahamut at Dragon's Peak. As the Warriors of Light traverse the area, they get kidnapped by the Bahamut, who carries them up to its nest and plans to feed them to its young. The party also finds Desch here. The party enters a battle against the Bahamut, but must flee because it is too powerful to defeat.

Later, when the warriors obtain the Invincible, they can optionally enter Bahamut's Lair to fight Bahamut once more. After the Warriors of Light defeat Bahamut, it offers itself as a summon. Alternatively, instead of fighting Bahamut, the warriors can buy it for 60,000 gil (65,000 gil in the Famicom version) at a Summon Shop in Eureka.

In Final Fantasy IV, Bahamut lives on the Red Moon in the Lair of the Father. It awaits Rydia and the party to challenge him in a battle so that they can receive Bahamut as a summon, therefore allowing Rydia to summon it in battle. Upon being defeated, Bahamut says that Rydia is the first Summoner that it has ever accepted.

In Final Fantasy V, Bahamut is released in the Merged World when the party obtains the Pyramid of Moore tablet. Upon being released, Bahamut awaits them on the summit of North Mountain. Once the party gets there, a battle starts. During the battle, Bahamut uses various elemental attacks. Once the party defeats Bahamut, they receive it as a summon, just like in the previous two games.

As a summon, Bahamut is at level 5, and it costs 66 MP to use. Despite having a wide range of elemental attacks as a boss, Bahamut deals non-elemental damage as a summon.

In Final Fantasy VI, Bahamut is one of the Espers, and does not appear as a boss. The party can acquire Bahamut by defeating Deathgaze in the World of Ruin. Bahamut costs 86 MP to use, and it has a spell power of 92. A character equipped with Bahamut Magicite learns Flare at a x2 rate and receives a 50% increase in HP upon leveling up.

In Final Fantasy VII, aside from the regular Bahamut, the game introduces two stronger variants, Neo Bahamut and Bahamut ZERO, both of which are referred to as "strains". Their signature moves are Giga Flare and Tera Flare respectively.

In Final Fantasy XI, Bahamut is not a summon, and is introduced in the expansion Final Fantasy XI: Chains of Promathia as the Wyrmking, a terrestrial avatar that fights along his wyrms, namely Tiamat, Vrtra, Jormungand, and Ouryu.

In Final Fantasy XII, while Bahamut does not appear, the Sky Fortress Bahamut is named after it.

In Final Fantasy VII Advent Children, the character Kadaj summons Bahamut SIN to cause havoc in the city of Edge on the outskirts of Midgar.

In Final Fantasy Unlimited, the GunDragon is modeled after Bahamut, labeled as the ultimate summon of Kaze's MaGun. Though we saw it as the "Chaos-tainted" red-black creature emerging from the Pillar of Darkness, the GunDragon made its official appearance at the TV series finale in its true white coloring.

Bahamut is also referenced in Kingdom Hearts: Chain of Memories, in which Sora can use a sleight called Mega Flare (by stocking a Mushu summon card and 2 Fire magic cards). "The Undying" uses attacks named after the three Bahamut summons within Final Fantasy VII: Mega-Flare, Giga-Flare Sword and Tetra Flare.