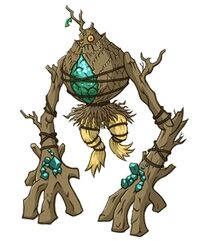 "Thanks a ton! It'd rock if I could roll along with you!"
—Golem
Not to be confused with Stone Golem.

Golem is a recurring summon in the Final Fantasy franchise. He first appears in Final Fantasy V. Golem's signature ability is Earth Wall, in which it erects a barrier that absorbs physical attacks. 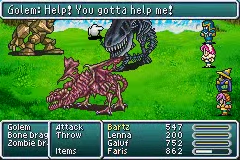 In Final Fantasy V, a single Golem appears as randomly encountered enemy in Drakenvale with the name "???". Even though it has 2,000 HP, the party cannot defeat the Golem because its action is always to attack them and then flee.

In the last area of Drakenvale, which is where the Dragon Pod is fought, there is a fixed encounter of a Golem (who is no longer called ??? on the battle interface, which shows its actual name instead). During the battle, Golem is being attacked by a Zombie Dragon and a Bone Dragon, and cries for help. Both the Zombie Dragon and Bone Dragon prioritize attacking Golem, but if Golem is defeated, the two dragons resume their focus on battling the party. Even if the Golem has been defeated, it can still be encountered again in the same fixed encounter. If the party defeats both the Zombie Dragon and Bone Dragon, Golem thanks them, and the party obtains Golem as a summon.

As a summon, Golem costs 18 MP to use in a battle. If summoned, Golem uses Earth Wall, which lessens the amount of damage of enemy attacks unto the party.

In Final Fantasy VI, Golem magicite can be bought from the Jidoor Auction House for 20,000 gil. During a battle, Golem can be summoned if its caster uses 33 MP. Once summoned, Golem appears whenever an enemy tries to attack the party and uses Earth Wall to block physical attacks from enemies, preventing the party members from taking damage. However, enemies can still use moves that inflict status ailments unto party members. Golem can only block a couple of attacks until its HP wears out for the remainder of the battle. Golem can teach its caster Protect, Stop, and Cura at a 2x learn rate.

In Chocobo Racing, during Chapter 3: A Life in Ruins! of Story Mode, both Chocobo and Mog encounter Golem at The Ancient Gate, where he serves as the village's gatekeeper. Golem does not allow Chocobo and Mog to pass, but then notices that Chocobo has a Blue Crystal. Golem also has a Blue Crystal, and he challenges the characters to a race. If beaten, Golem decides to join alongside them for the remainder of their journey.

As a racer, Golem rides a blue jeep, the Rockin' Roller V8, which is a bit slow but has good handling. As a racer, Golem's default ability is Grip-Up, which increases his handling even further.

The Golem in the Chocobo series resembles its Final Fantasy V counterpart, but two of its most distinguishing features are its glowing, yellow eyes and a spiked, red wristband that it wears on each wrist.

"A giant rock statue brought to life by the power of magic. Golem stands as the gatekeeper of the ancient ruins that were once the village walls.""