Limit Breaks generally occur when a character has taken a large amount of damage in combat, and offers the possibility of dealing large amounts in return. Subsequent games in the series have used similar mechanics with different names. 'Limit Break' has been popular slang for similar attacks or abilities in other computer role-playing games. Several other games have adopted systems similar to the Limit Break mechanic. Limit Breaks are comparable to super combos in fighting games.

The generic Limit Break, or the similar concept of a character going into an alterered state that can give them the advantage in a fight, is now a common feature of many RPGs. Besides its incarnations in the Final Fantasy series, Tales of Symphonia contains an "overlimit" state in which a character takes less damage, cannot be staggered, and allows some characters to perform an immensely powerful attack. Legend of Dragoon also contains a similar game mechanic. 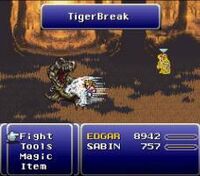 Final Fantasy VI featured a precursor to the Limit Break in its "Deathblows". If a character was at very low HP (lower than one-eighth their maximum amount), there was a 1 in 16 chance that they would use a Deathblow when the normal Fight command was issued.

Some status effects (muddle, image, clear, and zombie) will prevent the Deathblow from occurring. Characters will also never use Deathblow during the first 25.6 seconds of combat. Each character can only perform a Deathblow once per battle.

All Deathblows are magical attacks that ignore defense, and cannot be blocked by the target. The Deathblows of Relm and Strago are instant death attacks, rather than damage-dealing attacks like the others. Shadow's attack will also inflict seizure status.

In the Japanese version of Final Fantasy VI, these attacks were called "Hissatsuwaza", for which the literal English translation is "Certain Kill Technique", and is often translated as Deathblow. However, a significant amount of text had to be omitted from the English version of the game, including a line where one of the instructors in Narshe gives the player this information.

In Final Fantasy VII, each character has a Limit Break meter that fills up as the character takes damage. When the bar is full, the character can unleash a powerful attack. Not all limits have damaging effects; Aeris's Healing Wind, for example, will heal the party.

Limit Breaks are divided into four levels (the exception being Cait Sith). The first three levels contain two limits, while the fourth level only contains one limit (with Vincent being an exception at only one limit per level, though each limit performs two techniques). Each character starts with their first Level 1 Limit Break. By performing the limit eight times, the character will obtain the second Level 1 Limit Break. When the player has killed a set number of enemies, he or she will learn the first Level 2 Limit Break. The process then repeats. The only exception is the Level 4 Limit, which must be learned by obtaining a special item for each character, usually in a side-quest relating to that character, and all other limits exclusive to that character must be learned.

The player must choose outside of battle which level of Limit Break they want to use, but within battle all limits from that particular level are available. Higher-level limits are more powerful, but require the absorption of more damage to charge the Limit Bar fully. Once obtained, the Limit attack may be saved for later, but as the Limit option replaces the Attack option, the character's repertoire is limited to magic-based attacks, summon monsters, and any command materia that they have equipped and items.

In Final Fantasy VIII, the Limit Bar was removed entirely, and replaced with the "Crisis" system. Whenever a character's turn comes up, there is a small chance that they will be given the option to perform a limit; this chance rises as the character loses HP, and for this reason some players intentionally allowed some or all of their characters to remain critically wounded. The "Crisis" probability can also be raised by status ailments, party members being KO'd, and the "Aura" spell. In the Japanese version, these desperation moves were called Special Arts, shortened to Special in the Status Menu. They were re-named Limits in the North American and European versions of the game due to that term's association with Final Fantasy VII, the first RPG to become truly popular in those regions.

Kuja is transformed by Trance.

Final Fantasy IX renames Limit Breaks to Trance and returns to the Final Fantasy VII model, with one notable difference: a filled Trance bar cannot be saved for later battles. The instant a Trance bar is filled, that character will go into Trance automatically. It is impossible to save a Trance for a later battle, or even a later turn in the current battle. Trances remain in effect for a few turns and increase the statistics of the Tranced character, as well as change their command skill.

Unlike its predecessors, Final Fantasy IX uses Trance to affect the story. Certain battles important to the plot may involve compulsory Trances, usually for characters emotionally involved with the fight.

In Final Fantasy X, the Limit Break system has been renamed to Overdrive, but retains its core function. In addition to each character's different Overdrives, the characters can also learn new Overdrive Modes, which change how the meter is filled. For example, characters who heal their allies often learn the "Healer" Mode, which causes the character's bar to increase when they heal allies, instead of when they take damage. Only one Overdrive Mode can be selected at a time. Modes are learned after a character does a certain behavior enough times (for instance, Yuna will probably learn "Healer" first because she learns curative magic long before the other characters can). In addition, the Aeons can also perform Overdrive attacks. Their Overdrive meters fill when the Aeon attacks, when it takes damage, and when it dodges an enemy attack. Full meters can be reserved for oncoming battles.

Final Fantasy XI continues the Limit Break tradition with Weapon Skills. As in previous games, a character can fill a special gauge by engaging in combat and then use the stored energy to unleash a powerful ability. This gauge can optionally be filled up to three times its normal capacity in order to magnify the effectiveness of a particular skill.

Although Weapon Skills are relatively weak compared to traditional Limit Breaks, they can be executed consecutively to produce additional damage events. This process, referred to as a skillchain or renkei, is the basis for much of the combat in Final Fantasy XI.

The 'two-hour' job abilities used by players and many enemies are also conceptually similar to Limit Breaks, providing a rare but powerful advantage in battle. The parallel is particularly clear when considering the battles against the avatars- their two hour abilities are their signature attacks, seen as Limit Breaks in other games in the series.

The term 'Limit Break' (or 'Genkai Toppa') in this game, however, is a term for quests characters must complete in order to increase the level caps from level 50, and again every 5 levels, until the 70 cap where you can level up your character to level 75 (the maximum level) without hindrance. These quests are given by Maat, in Ru'Lude Gardens (Jeuno).

Limit Breaks in Final Fantasy XII are named "Mist Knacks" in the Japanese version, and Quickenings in the English version. In Final Fantasy XII, the License Board has eighteen Quickening squares, each costing 50 LP; these squares are one-use-only, meaning that when one character obtains a particular Quickening square, that square will disappear from the License Boards of the other characters.

Each character can learn up to three Quickenings, with each successive Quickening requiring and providing an additional "Mist Charge" (extra MP bar) to activate. Upon activating a Quickening, the player is presented with that Quickening's attack animation, along with a menu in the corner offering several options bound to face buttons on the player's controller. These options allow the player to invoke another party member's Quickening, thus resulting in a chain; the option to refill a character's Mist Charges may also come up, allowing longer chains. If the player doesn't like any of the options (or doesn't receive any that can presently be used), they may press the R2 shoulder button to shuffle them; however, a timer set to a maximum of four seconds prevents lengthy deliberation. This timer also decreases in total duration for every Quickening chained (Each new attack in the chain has a timer equivalent to half the time it took for the previous choice to be selected added to the previous timer when the choice for the current Quickening was selected). Finally, it is possible to invoke a finishing attack (known as a "Concurrence") by using a specific numbers of Rank-# Quickenings (for instance, using three Rank-1 Quickenings results in the "Inferno" Concurrence; the strongest, "Dark Hole", requires four of each rank of Quickening). Each Concurrence deals non-elemental damage, despite the names and animations being shown as elemental-based (for example, the "Inferno" Concurrence takes the form of a burst of fire, but will not heal fire-based enemies).

Limit Break is an attack used by Vayne Novus, which allowed him to strike with greater power.

Limit Breaks do not appear in this game, save for one unique character's job skills. Cloud from Final Fantasy VII makes a cameo as a secret character, and his built-in skills are titled "Limit." Unlike previous games, however, these skills are usable at any time, and mostly mimic the Final Fantasy VII abilities, but almost all of them carry lengthy charge times that severely reduce their effectiveness.

In Final Fantasy Tactics Advance, Limit Break is a move that can only be used by Bladebiter or a Blue Mage that has learned the move from them. It is only usable when the monster's HP is critical, but does 999 damage (essentially a one-hit-KO since 999 is the maximum HP for a party character) and has 100% accuracy.

Moves classified as Limit Breaks typically present as command abilities, with many signature skills reaching the rank of EX or higher and therein more difficult to draw in the bi-weekly gacha. For example, Vaan, Ashe, and Fran from Final Fantasy XII have their respective Quickenings with Concurrences as skills, learned in order of their rank and acquisition as they present in the original game.

Limit Break abilities are termed Limit Bursts in both Final Fantasy Brave Exvius and its adjoining prequel War of the Visions: Final Fantasy Brave Exvius. In order to use them, a unit must first establish the required energy to use them. In Brave Exvius, enemy units drop LB crystals when hit; collecting enough will allow the player to activate the desired move after swiping to the Abilities menu. In War of the Visions, the player only needs to generate enough Ability Points (AP) to execute a similar move. However, each Limit Burst also has a fixed number of uses in WotV.