Narshe is a coal-mining town situated in the snowy mountains in Final Fantasy VI. It is the starting location, and the party visits Narshe a few times during their adventure. Narshe is surrounded by a network of mines called the Narshe Mines, and north of the town is Narshe Cliffs, which overlooks a large frozen canyon. 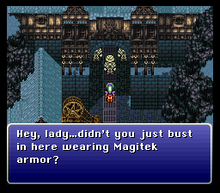 At the start of Final Fantasy VI, miners at Narshe unearth a frozen Esper. This gets the attention of the Gestahlian Empire, who sends out Biggs and Wedge as well as Terra, who is under their mind control, to retrieve the Esper. All three of them walk around in Magitek Armor. The three of them break into town and defeat every Guard and Silver Lobo in their path with ease. Just before the party can enter Narshe Mines, the guards send out two Megalodoths to attack them, but they are also defeated. The group fails to capture the Esper, which kills Biggs and Wedge but frees Terra by destroying the Slave Crown that controlled her. Both Arvis and Locke help Terra escape from the mines and then Narshe itself.

Following the events of South Figaro and the Lete River, the party splits into three groups, each going on a separate quest. All three quests end in Narshe. During a part of Terra's quest, she tries to enter Narshe with Edgar and Banon to discuss with Arvis about the possibility of Narshe joining forces with the Returners. The guards recognize Terra from when she raided Narshe, so they do not allow her to enter. Instead, the group opens a nearby rock wall to take a long, hidden shortcut through the mines and walk across short bridges hanging from Narshe's buildings before entering Arvis's house. There, Arvis tells them that he was unable to convince the rest of Narshe to side with the Returners. However, he does mention that everyone in Narshe went slightly berserk when the Esper was discovered. This marks the end of Terra's quest.

At the end of Locke's quest, he and Celes also arrive at Narshe. Locke informs everyone that Kefka and his Imperial forces are on their way to steal the Esper from Narshe Cliffs. Initially the Narshe Elder was hesitant in accepting help from the Returners, but found that the current situation left him no choice. Once all three groups reunite, they, the Narshe Elder, and Narshe's guards all go to Narshe Cliffs, where they manage to fight off the Imperial forces.

Later, Narshe's forces join both the Returners and Figaro's forces to plan an attack on Vector. Even with their powers combined, the forces are not strong enough to put their plan into action. Because Terra is half-Esper, she is asked to open the gate to the Esper World and ask the Espers for help. However, when the gateway is opened, the Espers end up destroying Vector, which is then occupied by guards from both Narshe and Figaro.

Optionally, after the party has obtained the Blackjack, there is an event in which they can go into a treasure room in a house on the east side of Narshe. There they can find Lone Wolf, who stole something from the previously-locked treasure chest. The party chases him in Narshe Mines to Narshe Cliffs. There, Lone Wolf is holding Mog hostage. Mog kicks himself and Lone Wolf to opposite side of the cliff. The party is given a choice to either rescue Mog or the Gold Hairpin, which was the item that Lone Wolf stole from the locked treasure chest.

In the World of Ruin, Narshe has been occupied by several enemies, and is no longer inhabited by its original citizens. Most of the buildings are locked except for Arvis's house, the Elder's house, Adventuring School, and the Armor Shop. The other buildings can only be unlocked by Locke.

This list does not include the few items found in the Adventuring School.

The shop inventories change once the party has obtained the Blackjack.

Before acquiring the Blackjack

After acquiring the Blackjack