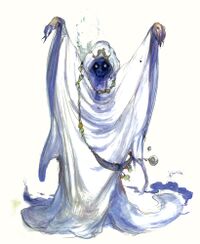 ??????, otherwise known as Ghosts, are two unnamed ghosts found on the Phantom Train in Final Fantasy VI. They are temporary party members, both of whom can be found in the cabooses, and can only join if there are one or two slots available in the party, the latter instance only being possible if Shadow leaves the party before they board the Phantom Train. The second Ghost in the party always has lower stats than the first one. Their name is displayed as ?????? on the menus.

Both Ghosts are equipped with a Lich Ring, which registers them as undead. This means that they are vulnerable to healing items. Besides the ability to attack and use items, Ghosts have the Possess ability, allowing them to cause instant death to a target, although at the cost of the Ghost leaving the party. If a Ghost is KO'd, they cannot be revived, and using Phoenix Down on them has no effect. After a Ghost is KO'd, it automatically vanishes from the party once the battle ends. In both cases, the party can optionally go into one of the cabooses to recruit the Ghost again. The Ghosts leave the party just before the boss fight against the Phantom Train itself.