Blizzaga is a Black Magic spell that appears in several Final Fantasy games. It can produce a large wind of ice and is an upgrade to the Blizzara spell. Blizzaga was the strongest ice-elemental spell until Final Fantasy Tactics, where it was given an upgrade, Blizzaja.

In Final Fantasy, Blizzaga (named Ice3 in the Nintendo Entertainment System and Final Fantasy Origins releases) is a level-7 Black Magic spell that deals ice damage to all opponents. The move can be learned at the Black Magic Shop in Gaia by Black Mage, Black Wizard, and Red Wizard. Each use costs 40 MP. It is one of Chaos's usable moves during the final battle. From the PlayStation Portable remake onward, the move is also used by the boss Chronodia. 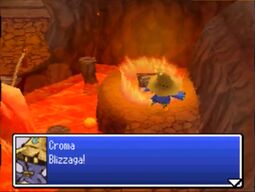 In Final Fantasy Fables: Chocobo Tales, after Irma creates a ring of fire around the The Ugly Chocoling book on Mt. Magma, Croma goes to the book and uses Blizzaga to douse the flame.