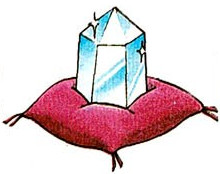 In the Captain N: The Game Master series finale, "The Fractured Fantasy of Captain N", the Crystal Eye is referred to as the light crystal, or generically as a crystal. In the episode, Astos has the light crystal that he stole from a witch, who is based on Matoya, several years ago. The characters go on a journey to retrieve the light crystal.

The Crystal Eye (or at least its original Nintendo Entertainment System counterpart) is a blue crystal that rests on a small, red pillow. The light crystal in Captain N: The Game Master has a very similar appearance, but the only difference is that it is pink instead of blue.