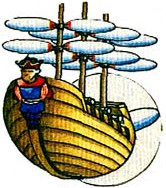 Airships are aerial transportation vehicles that appear throughout the Final Fantasy series, starting with the first game, Final Fantasy. In nearly every main series game, a character named Cid has his own airship. An airship usually becomes available for the party either halfway or near the end of their adventure, when they can access most of the world map. An airship is usually only capable of landing on grassy terrain. The player can look at a shadow underneath the airship to see where it can land. Airships range from having the basic appearance of a wooden ship with propellers to being technologically advanced.

In Final Fantasy, an airship is buried in the Ryukahn Desert, and the Warriors of Light can unearth it with the Levistone. The airship is the last transportation vehicle found by the Warriors of Light, and is necessary for them to reach northern areas. In remakes, it is mentioned that the airship was created by a Lufenian named Cid, but was buried in the Ryukahn Desert when Tiamat destroyed their civilization 400 years prior to the game's events. In the original Nintendo Entertainment System version, the airship's name is formatted in uppercase, AIRSHIP.

In Final Fantasy IV, there is an airship named the Enterprise, which is also generically known as the Airship[1]. The Enterprise was created by Cid Pollendina, and can be used in later parts of the party's adventure.

In Final Fantasy VI, there are two usable airships, the Blackjack and the Falcon.