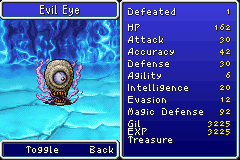 A comprehensive list of enemy statistics as seen in the bestiary from the Final Fantasy remakes. This bestiary does not include dummied-out enemies.

There is a total of 203 enemies, eight of which were introduced in the PlayStation Portable version. In Final Fantasy I & II: Dawn of Souls, there are 195 entries, and the bestiary menu has a percentage for the number of enemies that the Warriors of Light have encountered.

The following sections list the entries numerically as in the game's Bestiary itself. Only the first 128 entries apply to all versions of the game. Monsters 129-195 debuted in Final Fantasy I & II: Dawn of Souls and Monsters 196-203 (Chronodia and its alternate forms) debuted in the PlayStation Portable version, but none of these would reappear in the Final Fantasy Pixel Remaster version.

Additionally, note that dropped items were introduced to Final Fantasy in Final Fantasy I & II: Dawn of Souls, and the treasures and drop rates listed below do not apply to earlier versions of the game.