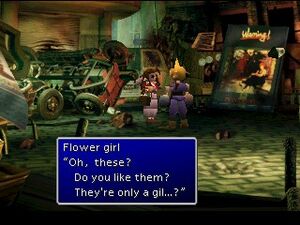 Gil (Japanese: ギル giru) is a currency used in every game of the Final Fantasy series. English translations have occasionally replaced it with "GP" or simply "G". "Gil" is both the singular and plural term for the currency; it is one of the few elements shared by the otherwise unrelated Final Fantasy games, along with chocobos, airships, Moogles, and Cid.

Gil can be used to buy weapons, armor, items, and accessories at the many stores and vendors throughout the worlds of the Final Fantasy games. Gil is earned primarily (sometimes exclusively) though fighting and winning battles, but many games provide other ways of earning the currency; in Final Fantasy VIII, for example, the player receives periodic wages according to his or her rank in the "SeeD" organization. Sometimes, the player can earn gil through minigames (such as those found in Final Fantasy VII's casinos), or through completing various tasks or missions. Still other means of earning gil exist, but the majority of these methods usually yield negligible amounts. Some games in the series, starting with Final Fantasy V, have characters or abilities that lets the player toss gil at an enemy in order to inflict damage; this ability is known as "Coin Toss".