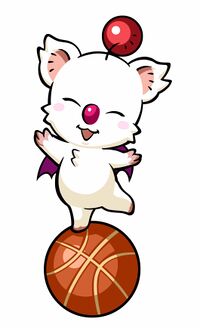 Character art of a Moogle from Mario Hoops 3-on-3

Moogles (モーグリ, Mōguri?), erroneously known as Mogs in Final Fantasy VII, are creatures in the Final Fantasy series. They usually have white fur, and an antenna protruding from the head with a small red or yellow pompom at the end. They have small red or purple wings, and their ears are shaped like those of a cat or rabbit. The Japanese name for Moogle is a portmanteau the words "mole" and "bat", and they have the characteristics of both animals. Since their debut in Final Fantasy III, Moogles have appeared in several Final Fantasy games and have become one of the series' mascots. Moogles often help the characters on their journey, usually in battle or to provide advice. Moogles often end their sentences with "kupo".

In Mario Hoops 3-on-3, a Moogle appears as one of five playable characters from the Final Fantasy series, the others being Ninja, Black Mage, White Mage, and Cactuar. Moogle is unlocked by earning a silver trophy in the Star Tourney on the Normal difficulty.

Moogle, along with the other Final Fantasy characters returned in the game Mario Sports Mix, where it is classified as a Tricky character (like in Mario Hoops 3-on-3). It is unlocked by beating the Mushroom Cup Tournament of any sport. Moogle's power in this game is very weak, and its speed is below average, but it makes up for those weaknesses with a high technique stat. However, unlike most characters with high technique attributes, Moogle's full power throws do not have a curve added to them.

In Super Smash Bros. Ultimate, a Moogle is featured alongside a Chocobo in the 1,450th spirit, Chocobo & Moogle, which reuses their artwork from Final Fantasy VII Remake. The spirit is a neutral, primary spirit, and it was included in the Spirit Board for Challenger Pack 8. Its representative fighter in the spirit battle is a gray Kirby. When equipped, the spirit increases a fighter's speed.