In the previous entry, Cloud was paid DLC, along with Midgar, music, and other material. Most of that returns, except that spirits replaces regular trophies, and the Chocobo Hat for Mii Costume.

Additionally, Sephiroth has been revealed as a paid DLC fighter unique to this game, which was released on December 22nd, 2020. This DLC also includes the Northern Cave stage, spirits, and music. Additionally, the Barret, Tifa, and Aerith Mii Costumes became available as separate purchases. 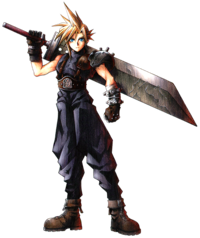