The story revolves around four orphaned youths, who are drawn to a crystal of light. The crystal grants them a portion of its power, and instructs them to go forth and restore balance to the world. Not knowing what to make of the crystal's pronouncements, but nonetheless recognizing the importance of its words, the four inform their adoptive families of their mission and set out to explore and bring back balance to the world.

In 2006, the game received a remake for the Nintendo DS, which itself has been ported on several systems.

The game has been re-released in Japan on the Virtual Console service for Wii, Nintendo 3DS, and Wii U. It was also one of the games featured on the Nintendo Classic Mini: Family Computer, but, owing to the Famicom version's Japanese exclusivity, it was replaced by Final Fantasy in international editions. 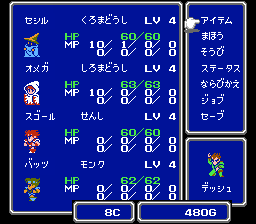 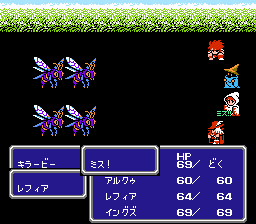 The gameplay of Final Fantasy III combines elements of the first two Final Fantasy games with new features. The turn-based combat system remains in place from the first two games, but hit points are now shown above the target following attacks or healing actions, rather than captioned as in the original versions of the previous two games. Auto-targeting for physical attacks after a friendly or enemy unit is killed is also featured for the first time. Unlike subsequent games, however, magical attacks are not auto-targeted in the same fashion.

The experience point system featured in Final Fantasy makes a return following its absence from Final Fantasy II. The character class system featured in the first game in the franchise also reappears, with some modifications. Whereas, in the original game, the player chooses each character's class alignment at the start of the game, Final Fantasy III introduces the "job system" for which the series would become famous. Jobs are presented as interchangeable classes: in the Famicom version of the game, all four characters begin as "Onion Knights," with a variety of additional jobs becoming available as the game progresses. Any playable character has access to every currently available job. Switching jobs consumes "capacity points," which are awarded to the entire party following every battle, much like gil. Different weapons, armor and accessories, and magic spells are utilized by each job. A character's level of proficiency at a particular job increases the longer the character remains with that job. Higher job levels increase the battle statistics of the character and reduce the cost in capacity points to switch to that job.

Square developed and released Final Fantasy III during the same period as Nintendo released its 16-bit Super Famicom console, intended as the successor to the original, 8-bit Famicom. Designer Hiromichi Tanaka attributes the fact that the original game was never released outside of Japan to Square's focus on developing for Nintendo's new console:

"Nowadays we know that when you've got a platform like PlayStation, you'll have PlayStation 2 and then PlayStation 3, and where you've got Xbox, you move on to Xbox 360 - you can sort of assume what's going to happen in the future. But back then, that was the first time that we'd seen a new generation of consoles, and it was really difficult to predict what was going to happen. At that time, then, we were working so hard to catch up on the new technology that we didn't have enough manpower to work on an English version of Final Fantasy III'"
—Hiromichi Tanaka[1] 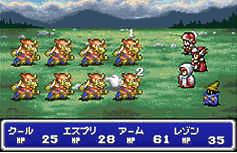 "When we developed FF3, the volume of content in the game was so huge that the cartridge was completely full, and when new platforms emerged, there simply wasn't enough storage space available for an update of FF3, because that would have required new graphics, music and other content. There was also a difficulty with how much manpower it would take to remake all of that content."

Following the failure of the effort to remake the game for the WonderSwan Color, and Square's merger with former competitor Enix to form Square Enix in 2003, the company assured that the game's remake would not be completely forgotten, and there was speculation that it might find its way to Sony's PlayStation or Nintendo's Game Boy Advance as its predecessors had.[5][6] Square Enix considered porting the game to the PlayStation 2, but was eventually convinced by Nintendo to develop the title for their new handheld system, the Nintendo DS, a decision that would later be positively reinforced by the commercial success of the Nintendo DS.[7] The Final Fantasy III remake was first announced to be in development on October 24, 2004, but detailed information did not emerge until a year later.[citation needed] Hiromichi Tanaka headed the project as both the executive producer and director. His guidance and supervision were needed because the remake was not a mere graphical update as Final Fantasy and Final Fantasy II's remakes were, but a total overhaul using the Nintendo DS's 3D capabilities. Along with 3D graphics, a full motion video opening scene was produced for the game, similar to those found in the ports of the 2D Final Fantasy games for the PlayStation. Developer Matrix Software handled the programming of the game.

The remake was produced by Tomoya Asano and co-developed by Matrix Software and Square Enix. In addition, Ryosuke Aiba (Final Fantasy XI) was the art director. Akihiko Yoshida (Final Fantasy XII) redesigned the original characters for use in 3D, and designed the looks of the new playable characters. The formerly generic and nameless party characters were given new default names: Luneth (Runesu), Arc (Arukū), Refia (Refia) and Ingus (Inguzu). They were given new personalities and background stories, and additional scenes were added to develop their individuality; however, the main storyline was not altered significantly. Along with these four, additional characters (called "sub-characters") also join the party temporarily, like in the original. Unlike the original however, these characters may randomly participate in battle.

References in other games[edit]