A limited Nintendo DS Lite variation of Final Fantasy III was released around the time, along with some merchandise, such as character figurines. 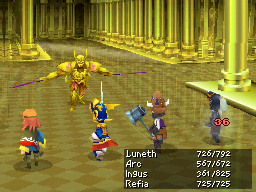 A battle in the Nintendo DS remake

The 3D remake of Final Fantasy III retains the gameplay of the original Famicom version, and tries to keep true to the original game while still addressing some of the more outdated and unbalanced elements. Like the original Final Fantasy III, this game features the upgraded turn-based combat system that was also seen in the first two Final Fantasy games. The experience point system featured in Final Fantasy remains in the game, unlike in Final Fantasy II and its remakes. The job system also remains, mostly identical to its original form. Like the original, jobs are interchangeable classes. However, in the original version, all four characters start out as Onion Knights, but for the remake the characters start out as Freelancers. Final Fantasy III is the first game in the series to feature special battle commands such as "Steal" or "Jump," each of which is associated with a particular job ("Steal" being the Thief's specialty, while "Jump" is the Dragoon's forte). In the remake, these commands have been rebalanced, and certain classes now have new commands to utilize.

Additionally, the player is now free to switch the characters' jobs as often as they want (between combats), but there is a small penalty associated with doing so. Advertisements for the game emphasize the job system by boasting that there are 279,841 possible party configurations.[1] Every time the characters switch their jobs, they incur decreased statistics for the next 2 to 10 battles, based on "job compatibility" and the difference in levels between the new job and old job.

The 3D remake features overhauls to the job system, including the rebalancing of the classes, the addition of new abilities, a new "Freelancer" class that becomes the default job for the characters at the beginning of the game (the Onion Knight is now a secret class), new events, a new crystal and dungeon, and the removal of capacity points. Unlike the original Famicom version, most of the jobs remain useful for the entire game; the ultimate jobs, the Ninja and the Sage, were redesigned so they have the same level of abilities as the Warrior and others. The battle system was overhauled by Kazuhiko Aoki. The remake takes advantage of the Nintendo Wi-Fi Connection service (prior to its shutdown on May 20, 2014) in the form of a Mail/Mognet system similar to what was in Final Fantasy IX. Various moogles allow players to send mail to one another as well as to various other characters. Sidequests can also be unlocked using this system, such as the quest to unlock the Onion Knight.

Unlike the original Famicom version, the design for each job is customized for each character as in Final Fantasy V.

A quick save option was also included with the game, similar to those from other 2D Final Fantasy remakes (except Final Fantasy I & II: Dawn of Souls). However, like in the original, there are no save points in the game's numerous dungeons.

The game stars four orphans—Luneth, Arc, Refia, and Ingus—who are raised at the remote village of Ur by the priest, Topapa. When the Wind Crystal sinks to the earth due to an earthquake one day, the four characters go to investigate. They manage to get lost, but eventually stumble upon the Crystal. The Crystal tells them of Xande's plans to conquer the world using Darkness, which could upset the balance of Light and Dark and lead to detrimental effects. It then proceeds to bestow the first Legendary Job Classes upon the four. From there on, the four become Warriors of the Light, and leave Ur in their quest. Granted the power of the Light, the Warriors begin to combat the darkness that increasingly consumes the world. As the other Crystals they encounter provide them more Jobs, the four Warriors become a formidable party strong enough to save the world from the darkness.

Like the scores of earlier 8-bit Final Fantasy games that had been remade, the Final Fantasy III DS remake features a faithfully rearranged version of the original score by Nobuo Uematsu. The score was arranged for the remake by Tsuyoshi Sekito and Keiji Kawamori, under Uematsu's supervision.

A remix of "This is the Final Battle" by Uematsu's rock group, The Black Mages, as well as a techno version of "Eternal Wind" by muZik, appeared on the DS game's soundtrack, which was released in Japan on September 20, 2006.

The Nintendo DS remake of Final Fantasy III was already in development when it was decided, after considering the PlayStation 2 and other consoles, to bring the game to the Nintendo DS, a decision that would later be positively reinforced by the commercial success of the Nintendo DS.[2]

The Final Fantasy III remake was first announced to be in development on October 7, 2004, but detailed information did not emerge until a year later. Hiromichi Tanaka headed the project as both the executive producer and game director. His guidance and supervision were needed because the remake was not a mere graphical update as Final Fantasy and Final Fantasy II's remakes were, but a total overhaul using the Nintendo DS's 3D capabilities; however, the layout of the dungeons and towns closely matches the original. Along with 3D graphics, an FMV opening scene has been made for the game, similar to those found in the ports of the 2D Final Fantasy games ported by TOSE for the PlayStation remakes.

Akihiko Yoshida (who was the character designer of Final Fantasy XII) redesigned the original characters for use in 3D, and designed the looks of the new playable characters. The formerly generic and nameless party characters were given new default names: Luneth, Arc, Refia, and Ingus. They were given new personalities and background stories, and additional scenes were added to develop their individuality; however, the main storyline was not changed significantly. Along with these four, additional characters (called sub-characters) also join the party temporarily, like in the original. Unlike the original however, these characters may randomly participate in battle.

Final Fantasy III's reception has been mostly positive with high sales and fair reviews from video game critics. IGN states that "interest in FFIII should come as no surprise given...the popularity of the DS".[3] The game sold 500,000 units within the first week in Japan, beating Square-Enix's original prediction that they would only sell 350,000.[4] As of August 6, 2007, the game has sold 990,000 units in Japan and 460,000 units in North America.[5]