Chocobo Racing is a racing game of the Chocobo series that was released for the PlayStation in 1999. The game was both developed and published by Square.

As a formulaic kart racer, Chocobo Racing is often compared to the Mario Kart series. Its gameplay is mostly comparable to Mario Kart 64, which was the latest Mario Kart installment at the time. The game stars Chocobo, the titular character of the franchise. Most of the game's soundtrack reuses tracks from earlier Final Fantasy titles.

Cid gives Chocobo the Jet-Blades at the start of Story Mode.

The story is nine chapters long and is presented in a pop-up book fashion with accompanying full-motion video. To progress through the Story mode, the racer only needs to win against a racer in each chapter. A cutscene of the story plays before each chapter, although the player has the option to skip them to directly begin the race.

The story opens with chapter one, "Gadgets a go-go," where Cid presents Chocobo with a pair of Jet-Blades and offers him to take a test-run with them on the racetrack behind his lab. After the race, Mog shows up and asks Cid about the progress of the racing machine he commissioned. Cid promises to bring the machine by tomorrow, but later confides to Chocobo that he forgo it. The next day, Cid provides Mog his scooter, and Chocobo and Mog get into a race. After Chocobo wins, Mog confronts Cid over his vehicle's poor performance, but Cid replies that Chocobo won because of the differences in their abilities. He explains that the secret of Chocobo's Dash ability is the Blue Crystal on his leg-ring. Mog mulls over his Flap ability and decides he wants a Blue Crystal as well, so Cid recommends that the two go on an adventure to discover the secret of the Blue Crystal.

The two head out to discover the secret behind the Blue Crystal, meeting and racing other characters along the way. When the group reaches Mysidia, a White Mage there notices that all the companions have Magicite, which the other characters had previously referred to as Blue Crystals. The companions want to know the legend behind the Magicite Shards, but the White Mage agrees to tell them on the condition that they win against her in a race on the Floating Gardens. After the race, the White Mage reveals that the Magicite Shards used to be one large Magicite Crystal, but since others constantly fought over it, Ming-Wu broke the Crystal into eight pieces and scattered the shards to the four winds. The Magicite Crystal would be restored once all eight pieces are brought together. After this discovery, the companions continue searching for other racers that have a Magicite Shard.

After beating Behemoth in a race, he joins the companions as their eighth member. Once this happens, the group notices that their Magicite shards are starting to glow, and Mog discovers that he possessed Magicite all along. The convergence of all eight shards of the Magicite crystal fulfills Ming-Wu's prophecy, and the gate to Fantasia opens.

When the companions arrive in Fantasia, they are greeted by the Esper king, Bahamut. He decides to test their worth with a final trial, and welcomes their attempts to defeat him in a race. After the race, Bahamut acknowledges the powers of the group. He goes on to rhetorically ask if the companions knew why Ming-Wu broke up the Magicite. Bahamut is pleased that the companions came together in goodwill, and he decides to leave the portal between the world and Fantasia open, declaring that the two worlds will from now on live in harmony. 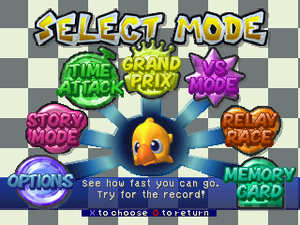 In Chocobo Racing, most of the characters ride in go-karts. Other characters fly, drive scooters, ride magic carpets, or even run on their own. There are five different racing modes:

Upon completion of the Story Mode, players are assigned a number of points determined by their performance, with 100 being the highest number. Using those points, the player is given the option of creating a racer with customized color and performance. The point value is distributed among five parameters: Max Speed, Acceleration, Grip, Drift, and A.G.S., which determines how fast the racer's ability gauge charges. A maximum of twenty points can be assigned to each of the five racing parameters. Customized racers can be used in all of the game's modes except for the Story Mode, and only the main characters and Bahamut can be customized.

While racing as any character, the player can accelerate, brake, reverse, activate Magic Stones, or use a "special ability" using the controller's analog stick and buttons. An additional move is the skid, which is executed by simultaneously braking and accelerating into a turn; as the game's cornering technique, the skid is useful for taking sharp turns quickly. If the player skids too sharply, however, the player's character will spin out. Before the start of any race, the player's character receives a speed boost if the player accelerates at the correct time during the countdown.

Screenshot of Mog equipped with a Doom Stone

Before each race, the player is prompted to assign a ability to the selected character. During a race, the player can only activate the chosen ability when the meter in the upper left-hand corner of the screen is full. After using the ability, the player must wait for the meter to recharge to use it again. A list of special abilities and their respective effects are as follows:

There are ten courses in the game. The first eight are available from the start, and the last two are unlockable.

The main characters, which are integral to the Chocobo series, are accessible from the start. There are secret characters that can be unlocked by completing the Story Mode a successive number of times.

There are ten unlockable characters, most being from the main Final Fantasy series or another Square franchise. other Square franchises. All of them are unlocked by completing Story Mode a certain number of times. The S.S. Invincible is the fast racer in the game. Characters unlocked after Squall are hidden on the racer select screen, and can be selected by highlighting Squall and entering a certain button combination.

Nearly every song are remixes of tracks that Nobuo Uematsu originally composed for various Final Fantasy games, although Kenji Ito is credited as the game's composer. In March 1999, Chocobo Racing had a soundtrack release for the music used in the game.

The first demonstration of Chocobo Racing was at the Fall Tokyo Game Show '98; it was then unclear if there would be a North American release. In the release of Chocobo's Dungeon 2, a bonus CD included a video clip of the game.[1] Originally slated to be released in late September/October, the release date was moved to August 1999 because "It was done early, and is now ready to go".[2]

Chocobo Racing is sometimes accused of merely being as cash-in attempt for the kart racer genre originating from Mario Kart series. The resulting game was received as average among several reviewers, criticized as being of low quality, with unpolished graphics, crude track designs, and poor controls. The game scored a 4.4 in GameSpot's review and a mediocre 5.6 in IGN's review.

Reader reviews are considerably more receptive; Chocobo Racing scores a 7.2 among readers at GameSpot and a 7.1 average among IGN subscribers. The game was not successful commercially, as it only sold 300,000 units in Japan.[3]