Squall Leonhart is the main protagonist of Final Fantasy VIII, most of which is seen from his perspective. Squall's Limit Break is Renzokuken, which is a series of four to eight slashes preceding one of four finishing moves. His signature weapon is the gunblade.

In the game, Squall is a 17 year old student at Balamb Garden, a prestigious military academy for elite mercenaries known as "SeeDs." As the game's story progresses, Squall becomes friends with Quistis Trepe, Zell Dincht, Selphie Tilmitt and Irvine Kinneas, and falls in love with Rinoa Heartilly. These relationships — combined with developments in the game's plot — gradually turn him from a loner to an open and caring person.

The first character Nomura designed specifically for use in Final Fantasy VIII was Squall, initially giving him longer hair and a more feminine appearance. However, Yoshinori Kitase felt that this design did not work, and asked Nomura to shorten his hair and make him look more masculine, which lead to the final design of Squall seen in-game. When designing Cloud Strife, Nomura gave him distinctly spiky, bright blonde hair, so as to emphasize his role as that game's main character. With Squall, Nomura wanted to try another unique angle to establish Squall's role, giving him the now trademark gunblade scar across his brow and the bridge of his nose. There was not yet a complete history conceived for the character, so Nomura left the explanation for Squall's scar to Nojima. Squall's design was completed by a fur ruff along the collar of his jacket, included by Nomura for the purpose of challenging the game's FMV designers, being but one example of the demands he has consistently extended to the programmers of the Final Fantasy titles as technology has advanced.[1]

As part of Squall's design, Nomura wanted to include silver accessories, which took the form of his ring, necklace and weapon. Squall calls the lion "Griever" and it seems to be symbolic of his courage and takes on significance as the plot of the game progresses. Squall's weapon is a gunblade, which is a sword using components of a revolver to send vibrations through the blade when triggered. This weapon was intended to offer a new way for players to control weapons in battle, and Nomura feels that the weapon bears an odd appearance.[1] Squall's model is simply called the Revolver, although he can upgrade the weapon at junk stores. Squall and his rival, Seifer Almasy, are the only gunblade specialists who appear in the game, although Laguna Loire uses one very briefly.

Squall's physical appearance consists of medium-length brown hair and cold grey eyes. Character designer Tetsuya Nomura has stated that actor River Phoenix was the influence for Squall; both share the same birthday and physical appearance. A small scar runs diagonally across the bridge of Squall's nose, which he receives at the beginning of the game in a training duel against his rival Seifer. His last name was taken from that of the Final Fantasy II character, Maria's brother Leon, or Leonhart, and Leon is the name that Squall adopts in Kingdom Hearts.

In Final Fantasy VIII, Squall is known as a "lone wolf" by his peers because he never explains his feelings. Even compared to the originally indifferent Cloud Strife of Final Fantasy VII, he comes off as cold to his allies. His superiors, such as his teacher, Quistis Trepe, regard him as difficult to deal with but greatly respect his natural talents. He is also known to be stoic in some situations. His taciturn attitude is also used for comic relief. In the cutscene where he first meets Rinoa, she coerces him into dancing with her at the SeeD graduation ball. He awkwardly bumps into other partygoers while staring constantly at his feet with a look of confusion. Rinoa, however, perseveres in partnering him, and Squall eventually reveals that he's quite capable of dancing, as it is a mandatory aspect of his training.

Squall is unwillingly dragged into the role of the hero when Cid, headmaster of Balamb Garden, appoints him as leader of the academy midway through the game. He is often thrown into a leadership role, as is evident in the Timber and Galbadia missions. During a late battle against Galbadia Garden, Squall demonstrates some leadership difficulties, which are tied to his lingering isolationism. Likewise, other characters have to make efforts to pull him out of his isolation, and Rinoa has to expend a lot of energy to pursue a romance with him. It takes considerable time for him to accept the others' offered friendship and fall in love with Rinoa and care for her. As time progresses, he grows more comfortable with the leadership role, especially when it comes time to defeat Ultimecia, the antagonist.

Throughout the game, he has a distinct rivalry with Seifer Almasy. The opening sequence depicts the duel in which Squall obtained his characteristic facial scar (and subsequently gave an almost identical one to Seifer, Squall's starts above his right eye and goes to his left cheek; Seifer's goes from left to right) and scenes in which Squall and Seifer are supposed to be cooperating are characterized by squabbles between the two cadets. Later, Seifer seemily allies himself with the Sorceress, requiring Squall to battle him several times. Nevertheless, despite their conflict, Squall still feels an underlying comraderie for Seifer, and mourns him in his own way when he believes Seifer to have been executed after an attempted kidnapping of Galbadian President Vinzer Deling.

According to flashbacks in the game, Squall grew up in an orphanage, along with many of the other main characters such as Zell, Seifer, Selphie, Irvine and Quistis. Though he remembers little of this past, it causes him to develop into an emotionally detached, highly cynical and introverted boy (his original goal is to go through life without any emotional links or dependencies). However, Squall gradually warms as the game progresses, and it is later revealed that his deliberate detachment from his companions is a defensive mechanism to protect himself from emotional pain, like he experienced when his older sister figure at the orphanage, one of the sole emotional supports in his early life, was forcibly separated from him.

Upon defeating Ultimecia, as his comrades are pulled back from time compression into their own respective places in the timeline, Squall takes a detour back to the orphanage, where he encounters a younger Edea. Since she does not want to involve any of the children, Edea ends up absorbing the dying Ultimecia's powers as part of the cycle of sorceresses (a sorceress must pass on her powers to a successor before she is allowed to die peacefully), and wonders aloud about endings and beginnings (dialogue mirroring words to Squall years later, on Disc 3). Squall plants the ideas for Garden and SeeD in her mind, creating an in-game loop in which he must become the leader of Balamb Garden so that he can make it to this point again.

There are strong indications in the game that Laguna Loire is Squall's father. During flashbacks involving Ellone, in which the characters dream they are people from the past, Squall consistently takes on the role of Laguna, despite the fact that any of the other characters in Squall's party may take on the role of Kiros or Ward. If Squall travels to Winhill after Garden is activated, he will encounter inexplicable visions of Raine throughout the town. Ellone also mentions that Raine died during childbirth and that she had a baby boy. When Squall is captured, all the Moomba keep referring to Squall as Laguna (it is later indicated that the Moomba recognize people by their blood; suggesting a tie between Squall and Laguna). Toward the end of the game, aboard the Ragnarok, Kiros and Ward make commentary as to Squall's resemblance to his mother and his dissimilarity to his father. Laguna also intends to tell something to Squall, but he opts not to due to the circumstances. As of his current surname, the game never reveals how he received the name "Leonhart", although it is possibly Raine's maiden name. Lastly, in the Triple Triad minigame, Laguna holds Squall's card. 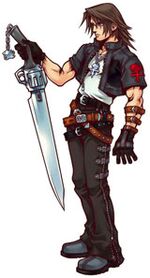 Squall (Leon), as he appears in Kingdom Hearts

Squall is a non-playable character in Kingdom Hearts, although he appears older and perhaps more similar to Laguna Loire. He no longer wears his fur coat and wears a short leather jacket with red wings on the back, resembling the decorations on Rinoa's dress, but he still wears his Griever necklace. He assumes the name Leon because Squall was someone who was unable to protect those he cares about from the Heartless when his home world, Hollow Bastion was consumed in darkness. "Leon" is voiced by David Boreanaz in the English language version of the game and Hideo Ishikawa in the Japanese version.

Leon held the Earthshine Gem which contained Simba; he gave it to Sora (a homage to his affinity towards lions in FF8). His role in Kingdom Hearts is to help guide Sora, on his battle with the Heartless, alongside various other Final Fantasy characters. While his appearance and age change (in Kingdom Hearts, he is 25, whereas in Final Fantasy VIII, he is 17), his personality remains the same. A memory-based version of Leon appears in Kingdom Hearts: Chain of Memories.

He returns in Kingdom Hearts II and was voiced by Doug Erholtz for the English version. Here, Leon is seen to be slightly more cheerful than he is seen in the original Kingdom Hearts, which could reflect his personality after the events of Final Fantasy VIII. He fights alongside Sora twice in the game. Unlike the other Final Fantasy characters (aside from Auron). Squall only features a slight update to his wardrobe. Leon still wears his Kingdom Hearts outfit, only receiving a fur ruff along the collar of his jacket, similar to his jacket in Final Fantasy VIII.

Squall is a secret character in Chocobo Racing and Itadaki Street Special. In addition, a 2D sprite of Squall occasionally makes an appearance on the loading screen of the PlayStation version of Final Fantasy VI.

Squall's gunblade, the Lionheart, appears as a Paladin weapon in Final Fantasy Tactics Advance. It also appears as a high-level sword for Tidus in Final Fantasy X and a Keyblade weapon for Sora in Kingdom Hearts. The gunblade also makes an appearance in Parasite Eve II as a weapon that the gorilla like Number 9 uses. It also becomes available for use after completing the game meeting certain requirements. In Final Fantasy XII, Gilgamesh carries Squall's gunblade as one of his weapons, yet Griever is not printed on the blade; likewise, it also appears (Griever ring and all) as a gun weapon known as the 'Ras Algethi' in the same game. The Velvet Nightmares, weapons of choice of Yazoo in Final Fantasy VII: Advent Children, closely resemble gunblades, and are constantly erraneously referred to as gunblades. The difference is that the Velvet Nightmares are merely guns that are used as melee weapons, whereas a gunblade is a sword that vibrates using a gun trigger as the hilt. In Dirge of Cerberus -Final Fantasy VII-, Weiss uses his own incarnation of the gunblade but wields two of them, both of which are identical to each other, and assume a shape similar to that of Sephiroth's trademark masamune sword.