Not to be confused with Gil Snapper, whose name is mistranslated as "Gilgamesh" in Final Fantasy IV Advance. 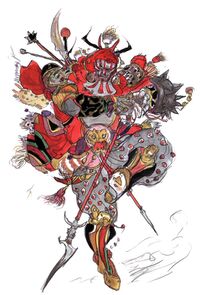 Gilgamesh (ギルガメッシュ, Girugamesshu?) is a character from the Final Fantasy series. He is characterized by having grey complexion, flamboyantly colorful battle armor, and many arms wielding many weapons at once. Gilgamesh has a fierce facade, but this masks his own childlike personality. He first appears in Final Fantasy V, where he is fought as a boss several times, but has appeared as a summon or even a standalone character in some of the later titles. In each of Gilgamesh's appearances, there is a part where he seeks the legendary sword, Excalibur, only to end up with a weak imitation, Excalipoor.

The name "Gilgamesh" comes from the Gilgamesh of Mesopotamian mythology.

In Final Fantasy V, Gilgamesh is a lieutenant of Exdeath. He is big on talk, but prefers to put his own safety first; more often than not he has others do the fighting for him.

Gilgamesh is first encountered in Galuf's World, where he is told to guard the imprisoned Bartz, Lenna and Faris. Galuf, who entered the world ahead of the three, infiltrates Exdeath's Castle and defeats Gilgamesh in a battle. The party later re-encounters Gilgamesh again at the Big Bridge, as they try to escape from Exdeath's captivity, but ends up fighting his army. Gilgamesh fights the party, and when weakened, uses magic to protect himself and uses the Jump command instead of fighting. After receiving enough damage, Gilgamesh excuses himself and flees.

Gilgamesh is next seen leading an attack on Xezat Matias Surgate's naval fleet. He summons a demon known as Enkidu to help him when he takes damage. When Enkidu is defeated, Gilgamesh eventually chickens out and jumps overboard, and almost knocks the party in as well, but their Wind Drake saves them.

Later in Exdeath's castle, desperate to save face, Gilgamesh transforms into a massive warrior with many arms and weapons and attacks Bartz's party with a sword he thinks is the legendary Excalibur, but which turns out actually to be a weak imitation called Excalipoor. Disgusted by Gilgamesh's perceived incompetence, Exdeath promptly exiles Gilgamesh to the Void.

When Bartz's party eventually reaches the Void, they find Gilgamesh lost and frightened, reduced almost to tears. He mistakes the party for a monster and attacks, but recognizes Bartz. After being told about how the party got in, Gilgamesh leaves, promising to be friends with the heroes if they get out.

Gilgamesh's final appearance is again in the Void, coming to the rescue of Bartz's party in an optional battle against a sealed monster called Necrophobe. During the battle, the Genji Armor can be stolen from Gilgamesh when he appears. Gilgamesh exchanges warm words of friendship with each of the party members, then self-destructs, annihilating both Necrophobe and himself in the process. This does not occur if the party has quickly defeated Gilgamesh.

In Final Fantasy VIII, Gilgamesh is a randomly visiting Guardian Force who replaces Odin in the fourth disc, if the player has already acquired Odin. Gilgamesh randomly chooses one of his four swords to attack all enemies on the screen: the mighty Masamune or Excalibur for heavy damage, the imitation Excalipoor for minimal damage (one hit point), or Odin's Zantetsuken for an instant kill (does not work on enemies immune to Instant Death, such as the final boss). According to the story, this is supposed to be a crossover from Final Fantasy V, where Gilgamesh would have escaped from the Void, evidenced by his dialogue during the Seifer fight.

He actually first appears in the final battle against Seifer in Lunatic Pandora, which opens with Odin being killed by Seifer himself. If the battle lasts about 10-15 rounds, Gilgamesh will appear, and (in a war of words) he defeats Seifer, his final remark being a reference to Final Fantasy V.

In Final Fantasy IX, Gilgamesh is a self-proclaimed great treasure hunter who refuses to tell anyone his name. Instead, he takes the nickname Alleyway Jack. The player encounters this four-armed man multiple times during his journey. The final location where he stays until the end of the game is at the Daguerreo Library. Unlike in previous Final Fantasy games, this Gilgamesh is not associated with battling. Instead, he accredits Zidane, the main character, a rank based upon the rate of stealing items in battle throughout the game. Upon reaching rank S, Gilgamesh gives the key item Rank S Medal in recognition of the feat, and it is then that he confesses his name as well as the lies about him being a great treasure hunter, just before leaving never to be seen again.

If the player receives the Excalibur II, there is a small note addressed to Gilgamesh about both Excalibur weapons.

To Brother Gil
Bro, I found the sword, like you told me. But there were two. One of 'em had a lame name, Something II. It was a dingy, old thing with flashy decorations, something you'd probably like. So I went with Excalipur. I'll be back after I find the Tin Armor.

In Final Fantasy XI, the leader of the Tenshodo pirating organization in Norg is a man named Gilgamesh. He is encountered during missions from the first expansion pack, Final Fantasy XI: Rise of the Zilart. This Gilgamesh is a standard human whose only distinctive accessory is a monster-faced belt buckle.

Gilgamesh is also the name of one of Final Fantasy XI's world servers.

In Final Fantasy's remakes, starting with the Final Fantasy I & II: Dawn of Souls release, Gilgamesh is a warrior exploring the undersea ruins of Lifespring Grotto, a secret dungeon available after defeating Kraken and getting the Water Crystal. As the theme was established, Gilgamesh is hunting for Excalibur, and believes he has it, but he really found Excalipur and even uses it in battle. He is a direct cameo of the Gilgamesh from Final Fantasy V, like many other cameos in this and the other optional dungeons.

In Final Fantasy XII, Gilgamesh is a powerful boss accessible in an Elite Mark hunt petitioned by Montblanc due to Gilgamesh's habit of defeating his opponents and taking their swords away to place into his collection. In fact, Gilgamesh is after the crown jewel to make his collection complete, the Masamune. His design is homage to both Final Fantasy V and Final Fantasy VIII as he appears with his companion Enkidu, a demon dog, and his theme music from Final Fantasy V, 'Clash on the Big Bridge", also plays. His sword arsenal in this game consists of a common katana and seven "legendary swords": Cloud Strife's Buster Sword, Squall's Gunblade, Zidane's Orichalcon, Tidus's Brotherhood, Odin's Zantetsuken, the Tournesol, and the Wyrmhero Blade (though all of them could be imitations, according to his Bestiary entry). His special attack is called "Ultimate Illusion", or in Japanese, Kyūkyoku Gensō (究極幻想).

It can be assumed that Gilgamesh never collected the real versions of the swords. There is an instance in which Gilgamesh holds a Buster Sword reading "fake" in Kanji on it; the other swords look different from their previous incarnations, such as a chocobo being printed on the Gunblade instead of Griever. The game's bestiary states that the swords are not authentic. And he really treasures those fake swords too. As explained below, upon his defeat, he will drop a sword in a hurry, but if you examine the sword first, the message you see will be "This is just an ordinary Sword of Legend", hinting that he is using replicas.

Though Gilgamesh is a formidable foe, he has his off moments such as when he accidentally fell off the building while revealing himself upon Enkidu's call in the first round. When Gilgamesh is defeated, he will leave behind the Sword of Legend, which he clumsily sneaks off with when Vaan and party leave. It is also possible to steal the rare Genji equipment set from him. He last appears when he finds the Matamune, a cursed fishing rod used for the fishing minigame – disappointed that it is not the Sword of Legend, the Wyrmhero Blade, he gives it to Vaan without a second thought. His entry in the game's Bestiary notes he has been traveling between dimensions; a reference to his recurrence in the series. Gilgamesh was voiced by John DiMaggio in the US version and Daisuke Gōri in Japan.

In remakes of Final Fantasy VI, starting with the Final Fantasy VI Advance release, Gilgamesh is one of the four Espers introduced. He can be encountered in the Dragon's Neck Coliseum if the party wagers the Excalipoor. Unlike other Coliseum battles, the player can fight him using all four party members.