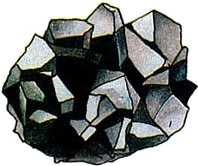 Adamantite (Japanese: アダマンタイト) is a mineral that appears as an item in several Final Fantasy games. It first appeared in the first game, Final Fantasy.

In Final Fantasy, Adamantite is a key item that is found in a treasure chest on the second floor of the Flying Fortress. The Warriors of Light could then go to Smyth in Mount Duergar and give him the Adamantite, which he uses to forge the Excalibur sword. In the original Nintendo Entertainment System, Adamantite was known as ADAMANT, also formatted Adamant[1].

In the Nintendo Entertainment System version, Adamantite did not have an in-game sprite. In the 17th issue of Nintendo Power, the Adamantite's artwork depicts it as being dark gray and having a rock-like shape. Starting with the Wonderswan Color remake, Adamantite received an in-game sprite, in which it has several light purple, crystal-like spikes.

In the Lifespring Grotto library, there is a researcher who tells the Warriors of Light that he is discovering how to create synthetic Adamantite so that he can become rich.