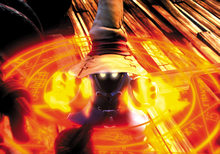 As its name would suggest, Fire involves its user inflicting a small wave of fire on their opponent, dealing fire-elemental damage. The move has three stronger variations, from weakest to strongest: Fira, Firaga, and Firaja. Each variant inflicts larger bursts of fire, and therefore more damage, on the target than its weaker counterparts.

In Final Fantasy, Fire can be learned from the Level 1 Black Magic Shop in Cornelia. Fire uses 5 MP for each use. In the original Nintendo Entertainment System version, Fire costs 100 gold, but starting with the Final Fantasy I & II: Dawn of Souls remake, its price was reduced to 50 gil. Three enemies can use Fire: Horned Devils, Rakshasas, and Spirit Nagas, the latter being the only enemy who cannot use Fira as well.