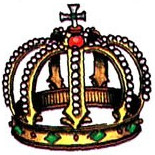 The Crown, also known as the Crown of Astos[1], is a key item that appears in Final Fantasy. It is a crown that belongs to the Western Keep's king. In the Nintendo Entertainment System version, the name is formatted as CROWN.

When the Warriors of Light visit the Western Keep, they find a king, who tells them that he was tricked by Astos, causing his castle to fall into ruin. The king asks the warriors to go to Marsh Cave and retrieve his Crown so that he can restore his castle. The crown is found in a treasure chest in an enclosed room on floor B3 of Marsh Cave. It is guarded by three Piscodemons, whom the warriors must defeat to obtain the crown. After doing so, the Warriors of Light must return to Western Keep with the crown.

Back at the Western Keep, the warriors talk to the king, who reveals himself to be Astos. He reveals that he tricked the warriors into retrieving the crown so that he could use it and the Crystal Eye's combined power to become the Elf King. The Warriors of Light manage to defeat Astos in a battle and thwart his plans.

Later in their journey, the Warriors of Light must use the Crown to access the Citadel of Trials.