Matoya's Cave is a location that makes its first and main appearance in the game, Final Fantasy. As the name implies, Matoya's Cave is the home of Matoya, and it is located north of the drawbridge. It is where the Warriors of Light can obtain the Jolt Tonic if they give the Crystal Eye to Matoya. 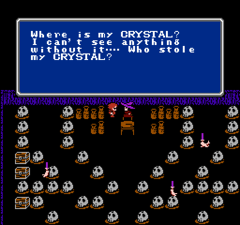 From the overworld, Matoya's Cave shares an appearance with the rocky terrain. The place has a black opening for an entrance. When entering Matoya's Cave, the Warriors of Light start at the stairs, which are at the bottom-right of the area. They can continue down a short hallway, and about halfway, there is a door to the main room where Matoya is. There are a few sentient brooms that sweep around Matoya's Cave, including one at the dead-end of the opening hallway. The walls in Matoya's Cave are purple.

The main room has are three treasure chests on the left side of the main room; the upper two each contain a potion, and the bottom chest contains an antidote. Matoya is standing at the upper-center of the main room. There is also a chair and a small roundtable.

Like other locations in Final Fantasy, Matoya's Cave received some gradual design changes, but its purpose is otherwise unchanged.

In the original Nintendo Entertainment System version, Matoya's Cave consists of a black floor with several skulls placed within the main room.

Starting with the WonderSwan Color version, Matoya's Cave received a light purple floor to match the wall color. There is also a red carpet that spans across most of the center of the main room. The skulls from the original release were removed and replaced by six small tables, each with a red tablecloth and a bull skull on them, that surround the red carpet. Other changes to the main room include: a bed added to the upper-left corner, two bookshelves added to the top-right corner, and two pots added to the bottom-right corner. The round table was given a white tablecloth.

Starting with the PlayStation Portable version, most of the cave is dark, and is faintly lit by the light blue flames along the walls. The Warriors of Light and their surroundings are still lit. The red carpet and each of the tablecloths have purple fringes.