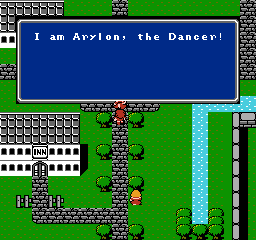 Arylon is a minor character found in Cornelia in Final Fantasy. She is found near the fountain at the center of town. Arylon provides hints and advice to the Warriors of Light throughout their adventure. Arylon is only named in the Nintendo Entertainment System release and is unnamed in Japanese Famicom version and remakes. Despite Arylon being a dancer, this characteristic is not shown in the game.