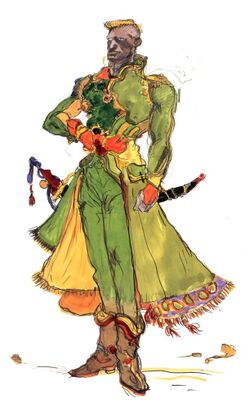 Leo Cristophe (レオ・クリストフ, Reo Kurisutofu), or General Leo, is one of the top generals of the Gestahlian Empire in Final Fantasy VI. Unlike the other two generals, Celes and Kefka, Leo refused to undergo Magitek infusion, so he could not use magic. He acted with dignity and honor in serving a regime that had neither.

In Final Fantasy VI, Leo was introduced to the party on the outskirts of Doma, as the commander of the Imperial Troops that would siege Doma Castle. Leo receives a note telling him to return to Vector to meet with Emperor Gestahl. Leo places the garrison under Kefka's control, and he wants there to be minimal casualties, so Leo forbids Kefka from poisoning the inhabitants of the castle. Kefka disobeys immediately.

Later, Leo leads the Imperial mission to seek a truce with the Espers after they attacked the capital of Vector. He was accompanied by both the Returners and the troops loyal to him. This turns out to be a ruse meant not only to lure the Espers into a trap (seeing Kefka reduce them to Magicite to collect for the Empire) but to also eliminate Leo and other Imperial dissidents who might threaten Emperor Gestahl's plans. Leo becomes a temporary playable character in a few minute sequence in which Kefka masquerades as Gestahl, playing on Leo's unswerving loyalty to kill him. He is thereafter buried by the Returners and surviving villagers of Thamasa.

Leo's special skill is Shock, in which he uses his sword to create a column of energy around himself and his opponent and deal out heavy damage. Leo is also equipped with an Offering relic, which allows him to perform four normal attacks at a time.