Ymir is a lightning whelk and the first boss of Final Fantasy VI. It is found in Narshe Mines, where it guards the frozen epser, Valigarmanda. Ymir has a large, purple shell that can absorb lightning. It has green eyes and a brown body, although only his face is shown. In versions prior to Final Fantasy VI Advance, Ymir is named Whelk, after its species. 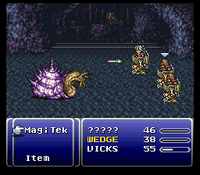 As Terra, Biggs and Wedge invade the mines in search for Valigarmanda, Narshe's forces send out Ymir as a last resort to protect the esper from them. When the battle starts, Biggs advises Wedge to not attack the shell. If Ymir's shell is attacked, it uses Megavolt to attack all three party members, causing all three of them to lose a significant amount of health. The shell has 50,000 HP, making it impossible to destroy, so the party must try to only attack Ymir's head, which has 1,600 HP. If lightning attacks are used on Ymir, he absorbs the damage and thus heals himself. Whenever Ymir's head is poking out, he uses Slime on a character to inflict them with the Slow status.

Ymir has two bestiary entries: one of its head and another of its shell. In the bestiary, only the selected part of Ymir is highlighted whereas the other part is darkened. In the PC and iOS re-releases, Ymir is grouped amongst other bosses in the bestiary.