Gigantuar, alternatively named Jumbo Cactuar is a giant variant of Cactuar with a curly black mustache. It appears in several Final Fantasy games as either an enemy or a boss, and makes its first appearance in Final Fantasy VIII. 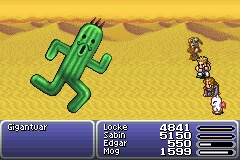 The boss fight against Gigantuar

In Final Fantasy VI, starting with the Final Fantasy VI Advance release, Gigantuar appears as a boss during a fixed encounter in the center of a desert near Maranda within the World of Ruin, but only if the party has defeated at least ten Cactuars. The party must defeat Gigantuar in order to obtain the Cactuar magicite. During battle, Gigantuar uses Knockdown as its Special Attack, in which Gigantuar deals heavy damage to the other party members.

Once all of Gigantuar's HP has been depleted, it uses 1,000 Needles ten times on every party member (totaling to 10,000 HP in damage). The party can only survive this onslaught if one of them uses Reraise.

Sometimes, if the Cactuar magicite is used, Gigantuar is summoned instead of a Cactuar. If this occurs, Gigantuar uses 10,000 Needles? attack on all enemies, dealing the maximum damage of 9,999 HP.