Ultros, also known as Orthros, is a recurring boss in the Final Fantasy games, and it first appears in Final Fantasy VI. Ultros is a talking, purple octopus with sharp teeth, and his eyes are sometimes red. He is abrasive and talkative, and cracks several jokes while talking. Ultros's signature ability is Ink. 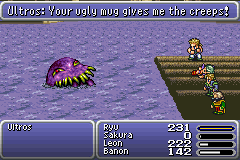 The first battle against Ultros in Final Fantasy VI Advance and one of his many random statements.

In Final Fantasy VI, Ultros is a boss who is fought on four separate occasions, and his stats become stronger for each battle. Ultros's sprite is different in the first battle than the three subsequent ones.

Ultros is first encountered by the Terra, Edgar, Sabin, and Banon as they head towards Narshe on the Lete River. After losing, Ultros causes Sabin to fall off the raft and float downstream to the easternmost continent.

Ultros is met a second time at the Opera House. He leaves a note for Locke explaining how he plans on ruining the opera in which Celes is performing. Ultros attempts to drop a four-ton weight from the rafters onto the stage. When the party attempts to stop him, they all fall on stage during a scene. Not wanting to disappoint the Impresario, Locke integrates the situation into the opera by battling Ultros. The orchestra even plays a special music piece during their combat. Once Ultros is defeated, the party is rewarded two gil, despite Ultros being a powerful boss.

The third battle takes place at the Esper Caves, as Ultros apparently wants the models of the Goddess Statues all for himself. The fight is stopped when Relm shows up wanting to paint Ultros's portrait. He refuses, but after being scolded by Terra, he allows Relm to sketch him. Seeing himself as nothing more than a big octopus, he retreats once again. The reward for defeating Ultros is three gil.

The final fight with Ultros takes place aboard the Blackjack as the ship heads towards the Floating Continent. Ultros is carried on the ship by Typhon. After a while, Ultros calls for Typhon to fight alongside him in battle.

In the World of Ruin, Ultros has been reformed, and works as a receptionist in Dragon's Neck Coliseum.

In Final Fantasy remakes, starting with Final Fantasy I & II: Dawn of Souls, Ultros, who is named Orthros in the games, is fought as a boss on floor B20 of Whisperwind Cove. His sprite is reused from his second, third, and fourth battles in Final Fantasy VI but with a brighter palette. Orthros has 17,000 HP, the same amount as in the boss battle on the Blackjack in Final Fantasy VI. When the Warriors of Light defeat him, they are rewarded a Rune Staff.