In Final Fantasy VI, the Phantom Train, originally known as GhostTrain in the Super Nintendo version, is a vehicle that carries the dead to the afterlife.

As Sabin and his party travel through the Phantom Forest, they come across the Phantom Train. The party go on board to check if there are any Doma Castle survivors inside, although they get locked inside. The Phantom Train starts to move, so the party search around for a way to stop the train. Because they have entered from the conductor's room, the party has to make their way to the front. The party encounters several ghosts along the way, many of which have varying behavior; some ghosts are enemies, some are temporary party members, and some of them are item sellers.

In Final Fantasy VI, the Phantom Train has ten cabooses connected to it; the farthest one has the Conductor inside, along with his room, the fifth through ninth ones have passenger seats, the fourth one is the dining room, the second and third ones each have two private seating compartments, and the first one only consists of a Save Point. The first compartment of the second caboose has four treasure chests stacked horizontally, and the second compartment of the third caboose has one treasure chest, although opening it triggers a fight against Sigfried. On the outside, some cabooses can be walked across, and some have one or two ladders which the party to climb up to reach the rooftop.

The cab of the train itself has three switches and another near the train's smokestack; flipping the first and third switches and then the switch near the smokestack stops the Phantom Train from moving.

In Final Fantasy VI, the party encounters enemies both inside and outside of the Phantom Train: 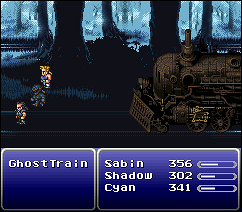 Throughout the boss battle, the Phantom Train quickly chases the party members on a railroad from behind as they quickly run from it. To reflect this, the background moves quickly. Because it is an undead enemy, the party can instantly defeat the Phantom Train by using a Phoenix Down on it. It can use three attacks: Diabolical Whistle, Acid Rain, and Saintly Beam. 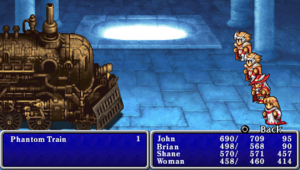 Unlike Final Fantasy VI, the Phantom Train appears at the left side of the screen rather than the right. It can no longer be defeated by a Phoenix Down, and is no longer invulnerable to Ice attacks.