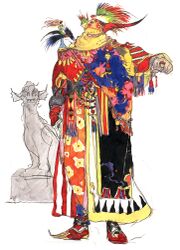 Gogo (ゴゴ) is the first of two hidden characters in Final Fantasy VI, encountered should the party be engulfed entirely by the Zone Eater on Triangle Island. In the game's development stage, Gogo was even harder to find as he wandered between different pubs in the World of Ruin, disguising himself as characters you had not yet re-recruited. Only after players find the real character could they then return to the fake one and Gogo would reveal himself and be recruitable.

A self-described "master of simulacrum," Gogo opts to mimic the party's desire to save the world, thus accompanying them. Gogo's gender is not known. He or she is so shrouded in clothing that even the body's form is indecipherable. It is assumed that Gogo's identity and gender remain vague because, as a mime who copies others, these facts are irrelevant.

Gogo's special ability is Mimic, which allows him/her to copy the actions of any party member. This creates a wide array of unique strategies, as Gogo can do things that normally only one person can do, such as Setzer's slots and Gau's rages. The only abilities Gogo cannot copy are Terra's Morph and Gau's Leap. The player can also "equip" Gogo with any three abilities in the Status screen. However, while Gogo can either Mimic or use any magic that the party collectively knows, Gogo cannot equip an Esper and learn his/her own magic. However, equipping him with the Magic ability gives him access to any spells known by your current party members, thus actually making him one of the most powerful characters. This boon is countered by Gogo's poor statistical strengths in all areas, as well as his/her limited selection of equipment.