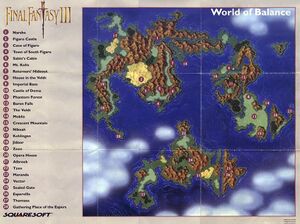 The World of Balance is the name of the world in the first half of Final Fantasy VI. It was created by the Warring Triad, whose balance of power upheld the world. The World of Balance has a northern and south continents, the former being a lot larger than the latter. It also consists of two small remote islands.

Halfway throughout the game, Kefka disrupts the balance of the Warring Triad in order to conquer the world. As a result, the World of Balance and much of its life was destroyed, turning it into the World of Ruin.

In terms of gameplay, the World of Balance is almost entirely linear, with few side-quests, and the story is loosely based around the character, Terra Branford.