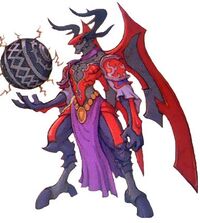 Diabolos, also named Diablos, is a black dragon with a red underside. It appears in several Final Fantasy games, usually as a summon, and makes its debut appearance in Final Fantasy VIII. In most of its appearances, Diabolos specializes in using Gravity and its more powerful variations, and in some games it has its own signature ability, Dark Messenger.

In Final Fantasy VI Advance and later remakes, Diabolos appears as an esper. Its magicite is obtained by defeating the Kaiser Dragon in the Dragons' Den.

It costs the user 100 MP to use Diabolos in battle. When summoned, Diabolos uses Dark Messenger, which reduces every opponent's HP to 1/16. Diabolos teaches both the Graviga x5 and Gravija x3 spells to its user. Whenever they level up, Diabolos provides them with a +100% boost to their HP.