Locke Cole is a thief who makes his debut and main appearance in Final Fantasy VI. In the game, he is one of the main and playable characters. Locke preferably identifies himself as a "treasure hunter" rather than a thief. Unlike most thieves, Locke can equip himself with heavy armor and swords. He also appears in Dissidia Final Fantasy NT, in which he is voiced by Yūki Ono in the Japanese version and Jonathan von Mering in the English version. 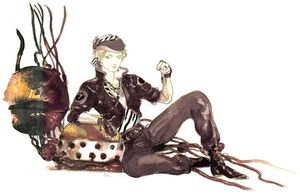 Locke is a daring thief, who uses the term "treasure hunter" to describe himself, perhaps in an attempt to justify his thievery and plundering. Locke is generally liked by many of the characters, but exhibits a constant desire to protect the female characters in the game, particularly Terra and Celes. This complex stems from an incident in his past involving his love, Rachel.

During a treasure hunt expedition with Rachel (from the flashback in the game, this expedition took place at Mt. Kolts), Rachel fell a great distance from a collapsing bridge, while trying to save Locke from the same fate. Locke pulled Rachel back from the abyss, and took her back to Kohlingen, where she was in a coma. During her coma, she became amnesic, and when she awoke to see Locke, Rachel did not remember him. Rachel's father told Locke to leave her following her amnesia, and a heartbroken Locke could only obey. One year later, the Gestahlian Empire attacked Kohlingen, and Locke learned that Rachel had died in the attack. Her dying words were "If Locke ever returns, please tell him I love him." Since hearing the news, Locke became heartbroken and consumed by memories of her death, and continued to blame himself for not having the power to protect Rachel. Since being consumed by these memories, Locke travels the world to find the ancient relic, Phoenix, in a last-ditch effort to bring Rachel back from the dead. Until that time, though, Locke has a herbologist (known only as "Patriarch") use herbs to keep Rachel's body in suspended animation in the basement of a house in Kohlingen, to keep it from deteriorating.

In his travels, he meets Terra in Narshe Mines, saves her from pursuers who want to return her to the Empire, and vows to protect her until her memory returns. Locke learning that Terra has amnesia likely triggers his memories of Rachel, and thus strengthens his conviction to protect Terra. Locke also helps rescue Celes from certain persecution in South Figaro, and swears to protect her as well. Celes has her suspicions as to why Locke wants to protect her, because all her life she has been used only as a weapon of the Empire, and wishes only for someone to accept her for who she really is. In their travels, Locke becomes attached to Celes, but Locke has doubts about Celes's loyalty to the Returners in the Magitek Research Facility, when Cid presents the possibility that Celes brought them there, "seeking to cause an uprising". This causes great discontent in Celes, and in an effort to prove her truth to her word, she heals Locke and his companions after they are attacked by Kefka, and attempts to keep Kefka at bay. After that incident, Locke feels bad for doubting Celes's motives, but Locke's previous doubt hurts Celes deep, and she in turn distances herself from Locke during their journey to Crescent Island with General Leo. Although frustrated, Locke continues to protect Terra.

In the World of Ruin, Locke continues his search for the elusive Phoenix, which further shows his inability to let go of his past. When he finally finds the Phoenix magicite, he returns to Kohlingen to attempt to use Phoenix on Rachel. When he tries to use Phoenix, the magicite shatters, but the Phoenix's power revives Rachel for only a little while. In the little time Rachel has, she tells Locke that she loves him, to let go of his past, and to "learn to love [him]self again". Rachel's spirit in turn reforms the magicite Phoenix, and after being able to talk to Rachel again, Locke gains a new sense of hope, and rejoins the rest of the party to fight Kefka.

Locke's special skill is Steal, which allows him to steal an item from an enemy. Later in the game, the player can equip him with a Sneak Ring, which doubles the success rate of Steal, and the Thief Glove, which changes his Steal command into Capture (named Mug in later games). The Capture command steals from an enemy and also attacks it in the process.

Locke also has a 4 hit version of Capture. If Locke is equipped with both a Thief Glove and an Offering, his Capture ability hits up to four times in a similar fashion to Cyan's Quadra Slam and Quadra Slice skills. However, the actual theft will only occur once, even if the game informs the player that multiple thefts occurred; only one of the mentioned items will be in the player's inventory.

Locke's Deathblow is called Mirager. He performs a leaping attack with afterimages trailing him. The attack is very similar to Sabin's Bum Rush, only much more powerful.