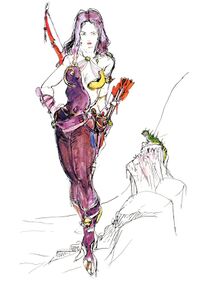 Maria is the main female character and a party member in Final Fantasy II. She is a kindhearted and strong-willed individual, and Maria has a brother named Leon, whom she loves very much. Appearance-wise, Maria's main trait is her purple hair.

Maria set the standard for female protagonists in the Final Fantasy series, as several of the later early heroines share the same personality traits. Unlike most lead female characters in the series, Maria's love interest is unknown.

Like the other three main characters of the game, she grew up in the town of Fynn, which was attacked by the Palamecian Empire. She is deeply saddened by the disappearance of her brother, and sets off with Firion and Guy to find him with great determination.