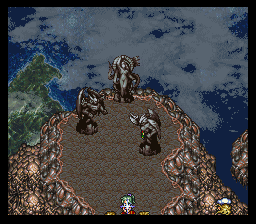 The Warring Triad statues, before Kefka moved them, in the original Final Fantasy VI

The Warring Triad (三闘神, Santōshin) are three beings directly responsible for the War of the Magi and the creation of Espers in Final Fantasy VI. The gods are individually named Fiend, Demon, and Goddess.

A thousand years prior to the events of Final Fantasy VI, the Warring Triad were in a war with one another. They turned many humans into Espers and forced them to fight on their behalf. One day, upon realizing the destruction they have caused, the Warring Triad cease their battle, free the Espers, and mutually seal away their abilities, reducing themselves to stone statues. For centuries, the magical balance of the Warring Triad maintained harmony throughout the world. They are the source of magic and, by extension, the life force for Espers.

During the game's events, Emperor Gestahl sought to gain control of the Warring Triad's power. Gestahl is later betrayed and slain by Kefka. Even later, Kefka takes over the Floating Continent, where the statues are found, and upsets their balance, which destroys the entire planet and turns it into the World of Ruin. By draining the Warring Triad's power, Kefka gains the Light of Judgement, which he uses to destroy any dissidents.

As the party traverses the final area, Kefka's Tower, the Warring Triad are awakened as mindless husks, the Statue of the Gods, who are the penultimate boss before the final battle against Kefka.

The Warring Triad appears in Final Fantasy XIV: Heavensward in the form of statues on the floating continent Azys Lla. They are virtually identical to the original sprites in appearance. A series of side quests allows players to fight them for powerful weapon rewards. In this appearance, the three deities are given names based on notes from original concept artwork that ended up not being used in Final Fantasy VI. The Fiend is named Sephirot, the Goddess Sophia and the Demon Zurvan.