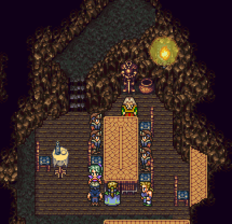 The Returners is a resistance group consisting of people opposed to the Gestahlian Empire in Final Fantasy VI. It is led by a man named Banon. The Returners have their own hideout located in the Sabre Mountains.

In the World of Balance, the Returners try to curb the Empire's increasing power. One of the ways in which they try is by enlisting the aid of Espers, but when the Espers go berserk and decimate the Imperial capital of Vector, they learn that magic is too powerful and unstable of a power to be harnessed.

In the World of Ruin, the Gestahlian Empire no longer exists, and therefore the Returners are no longer an organization. However, most of the playable characters are often collectively referred to as Returners.