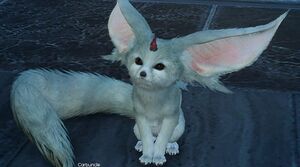 Carbuncle is a summon that appears in several Final Fantasy games. It first appears in Final Fantasy V. Carbuncle is a tiny animal which is usually depicted as being either light blue or green, but is always shown with a red gemstone on its forehead. Carbuncle has attributes similar to a fox, particularly its long, bushy tail, and it also has a tuft of hair and very long, pointed ears. In earlier games, Carbuncle has three-toed feet and appeared to be bipedal. If summoned, Carbuncle uses its signature move, Ruby Light, which casts Reflect on all party members.

Carbuncle's name is shared with the archaic word carbuncle, which means a deep-red or fiery colored garnet or other dark red precious stone, like the gemstone on Carbuncle's forehead.

In Final Fantasy XI, Carbuncle is one of the game's terrestrial avatars, alongside Fenrir, Diabolos, Phoenix, and Bahamut.

In Final Fantasy Crystal Chronicles, several Carbuncles inhabit the Legendary City of Mag Mell, but do not appear as a summon.