The Antlion is a massive brown antlion and a boss fought in a few Final Fantasy games, the first being Final Fantasy IV. It is encountered at the lowest floor of Antlion Cave, named Antlion Nest, where it guards the Sand Ruby. 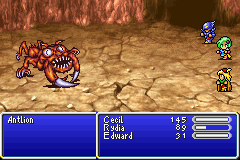 In Final Fantasy IV, when the party (Cecil, Rydia and Edward) enter the Antlion Nest, they go to the center, and according to Edward, it is where the Antlion lays its eggs. The Antlion's pincers can be seen from the top screen Rydia gets scared of the Antlion, but Edward tries to assure her that the Antlion is not aggressive. He tries to demonstrate by taking the Sand Ruby, but is immediately attacked by the Antlion, thus starting the battle.

During the battle, whenever a party member attacks the Antlion (except when Rydia summons a Chocobo), it attacks them using Counter Horn. Because the Antlion deals a lot of damage, Edward often has to use the Heal ability to restore his own HP along with other party members.

After defeating the Antlion, Cecil, Rydia and Edward obtain the Sand Ruby. Edward wonders why the Antlion was so aggressive, as he remembers the species to be mostly peaceful. Cecil tells him that monsters have recently been multiplying rapidly and have been showing a difference in behavior. With the Sand Ruby, the party leaves the Antlion Cave to travel back to Rosa.