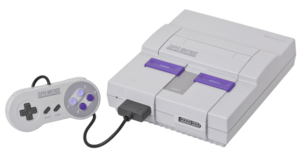 The Super Famicom, the original and Japanese equivalent of the Super Nintendo Entertainment System

Three games of the main Final Fantasy series and a few spinoffs were released for the console.