"Behold! I am the Lord of Water, Cagnazzo!"
—Cagnazzo, Final Fantasy IV

Cagnazzo is a large, turtle-like Archfiend that is associated with the element of water. It makes its first and main appearance in Final Fantasy IV and its 3D remake. Cagnazzo also appears as a summon in some games, such as the Dissidia Final Fantasy series.

In Final Fantasy IV, Cagnazzo is first encountered when Cecil re-enters Baron Castle as a Paladin. It is revealed that Cagnazzo killed the King of Baron and disguised itself as him to deceive the Red Wings into going to Mysidia and stealing the Crystal of Water, which gives its bearer control over the element of water. Cagnazzo is the self-proclaimed "Lord of Water".

Shortly after Cagnazzo reveals itself, a boss fight starts. In the battle, Cagnazzo is resistant to several types of Magic but is vulnerable to Ice-elemental attacks. Because of this, Palom and Tellah can use Blizzard and its stronger variants to deal heavy damage to Cagnazzo. It has Tsunami as an ability.

When the party defeat Cagnazzo, they leave the throne room. Just as they enter a hallway, they hear Cagnazzo's voice. It laughs and tells the party that, although it has defeated, they have not heard the last of him. Just as Cagnazzo invites them to join him in hell, the walls of the room start closing in on the party. Palom and Porom sacrifice themselves by turning into stone statues, which stop the wall from moving, allowing the party to escape the room and continue their journey.

Later, in the Giant of Babil, the party encounters Cagnazzo and the other three Archfiends, who are all more powerful than in their respective first battles. According to Cagnazzo, Zemus has revived all four of them. In the ensuing battle, the four Archfiends are fought individually, and the battle interface uses the title Elemental Archfiend for each of them rather than their actual names. Cagnazzo is the second Archfiend fought in the battle. 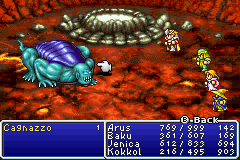 In Final Fantasy remakes starting with the Final Fantasy I & II: Dawn of Souls release, the Warriors of Light encounter Cagnazzo in Hellfire Chasm along with the other three Archfiends, each fought on different floors. Cagnazzo is specifically fought on floor B5. In battle, Cagnazzo can use Tsunami, like in Final Fantasy IV, but can also use Haste and Curaga. He no longer protects himself with a water barrier. When the warriors defeat Cagnazzo, they obtain the Light Curtain.

In Dissidia Final Fantasy, Cagnazzo appears as a summon, and its Summonstone can be obtained in Shade Impulse 2-2, on the H5 coordinate. If summoned, Cagnazzo uses Deluge, which freezes an opponent's Bravery for 30 seconds. Cagnazzo can be summoned twice per battle, and it recharges after 6 battles.

There is an obtainable armor bearing Cagnazzo's name, Cagnazzo's Carapace.

Cagnazzo has a muscular blue body slightly resembling that of a muscular human's. It has a smooth, light purple shell and underbelly. Cagnazo's head is round, and his face shows blank, white eyes and a pair of small but sharp teeth. Cagnazzo has claws on each of its feet and a long tail. In Yoshitaka Amano's artwork, Cagnazzo's body is black, and in Final Fantasy remakes and the Final Fantasy I & II: Dawn of Souls artwork, Cagnazzo has a turquoise body.

In Final Fantasy IV and the Final Fantasy remakes, Cagnazzo has the same order in the bestiary, although the numbering remains different.