Ninja is a job class that appears throughout the Final Fantasy series, starting with the first Final Fantasy game. They are ninjas, as their name directly states, and they have the highest speed compared to most party members.

In Final Fantasy, the Ninja is a class upgrade to the Thief. Its clothing is red in the original Nintendo Entertainment System release, and it was changed to green in the first few remakes before changing to a darker red in the PlayStation Portable version.

In Mario Hoops 3-on-3, Ninja appears as one of the five playable Final Fantasy characters, along with Black Mage, White Mage, Cactuar, and Moogle. He is portrayed by Hironori Miyata. He can be unlocked by winning the Rainbow Tourney on the Normal difficulty. As his skill-set is based on his speed, grace, and power, he has an All-Around playing style. Ninja's Special Shot is the Leaf Veil, which lets him use his Ninjutsu skills to shoot the ball towards the net, and he dashes through a veil of leaves to dunk the ball with precision. The Leaf Veil is activated by tapping a capital N, for Ninja. By completing the Rainbow Tourney on the Hard difficulty setting and achieving a gold trophy, an alternate version of Ninja's attire is unlocked.

In Mario Sports Mix, Ninja returns along with the other playable characters from Mario Hoops 3-on-3. He maintains his playing style as an All-Around character. He is instead voiced by Scott Burns. Ninja is unlocked by beating one of the two Star Roads, located on the Star Cup Map. He also has an alternate outfit, called Shadow White, which is unlocked by playing as Ninja 20 times, by completing Star Road 4 times, or by finding him on the Flower Cup route. Even if the player is playing as Ninja during the Star Cup, a CPU Shadow White Ninja will still steal the trophy before the finals, and the player will challenge him alongside White Mage and Black Mage.

Ninja features average power and technique, while having above average speed. He also has the highest stat total, along with White Mage; 10/15.

Ninja's special shot involves him making two copies of himself to throw off opponents. In dodgeball, the shots that the copies make do count. For all the other sports, only the real Ninja's shot will count.

Ninja has the appearance of a human with black eyes and a traditional Ninja outerwear attire. He is portrayed as a balanced, all-around character in his appearances, focusing on speed, grace and power.

Ninja has an average frame for a male character, with similar bodily proportions to that of Mario and Luigi. Ninja's skin is an olive, tan complexion. He has a small, button nose which, along with his mouth, is mostly concealed by his mask. His eyebrows are dark and give his eyes a focused appearance. His eyes are round, and peer out of his helmet. Ninja's face is describable as round, with soft shape.

In Final Fantasy and the Mario Sports titles, Ninja is portrayed as wearing a red shinobi shōzoku, with various pieces of light armor and a flowing, white ninja scarf. His top is a red keikogi with a v-neck, and short sleeves with a white rib at each opening. His bottoms are baggy, red, and include a white slit on each hip. Dark red details include fingerless gloves, a ninja mask, tabi socks, a keikogi belt, and a modern hood. Light armor pieces include red and white accented arm-guards, shoulder armor, a helmet, and metallic chainmail under the keikogi top. The arm-guards are depicted with a three end split, metallic rings wrapped in half-circle studs, as well as an orange rupee on each forearm. 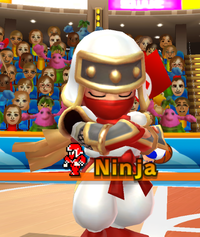 In Mario Hoops 3-on-3, an alternate form of Ninja's regular outfit can be unlocked by completing the Rainbow Tourney on Hard difficulty with a gold trophy. It replaces the red colors of his garb with indigo, as well as the dark red with a deeper indigo. The band around his mouth is a slightly lighter shade of red. The white accents are replaced with gold, and the orange rupees in his arm-guards are made pink. The chainmail underneath his top is much darker, and his helmet has a metallic ninja band on the front as opposed to the curved accent shape on his original costume.

In Mario Sports Mix, there is another alternate costume, called "Shadow White". It strongly resembles the Ninja outfit in Final Fantasy V. It can be unlocked by playing as Ninja for twenty matches, by completing the "Shadow White" mission at Star Cup, or by clearing Star Road four times. His mouth piece also turns a lighter red.

Ninja's abilities deal with various Ninja skills and Ninjutsu specials. Ninja is said to possess grace, speed and power, making him well-off as an All-Around character in his appearances.

Ninja's special abilities are centered around his use of Ninjutsu. In Mario Hoops 3-on-3, Ninja even replaces a few standard abilities with Ninjutsu skills. Rather than side-step, Ninja teleports from side to side, and instead of ground-pounding, Ninja will jump in the air and summon down a spiral of flames. He also makes use of doppelgangers when doing various swift motions while playing, such as dunking. His special move in this game is the Leaf Veil, and he uses a summoning circle to alter the effects of his ball, quickly sending it towards the hoop. This leaves him an opening to vanish through a gust of leaves directly to his ball, guaranteeing him a swift dunk.