Kefka Palazzo is the main antagonist and final boss of Final Fantasy VI. First introduced as the court jester and army general under Emperor Gestahl, Kefka reveals himself a nihilistic psychopath after setting in motion events leading to the Apocalypse and pronouncing himself the God of Magic.

Kefka is considered by many to be one the greatest video game villains. He has a distinct shrill, maniacal cackle and a darkly-comedic passion and dialogue.

Prior to the events of Final Fantasy IV, he was the first human to be experimentally infused with Magitek, which granted him the ability to wield magic, although the imperfect process warped his mind and made him into a nihilistic psychopath. 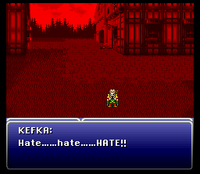 Through the first half of Final Fantasy VI, Kefka leads the charge for the city-state of Vector to conquer the world, one kingdom at a time, using their magic weapons. Kefka mentally enslaves Terra and uses her to lead an attack on the town of Narshe to claim the frozen esper Tritoch. When Terra escapes Imperial control, Kefka pursues her to Figaro Castle, setting it ablaze as she, Locke and Edgar flee.

During a siege on Doma, Kefka grows impatient with Leo and poisons the drinking water in Doma Castle, resulting in several deaths and a swift victory for the Gestahlian Empire. After the alliance of Espers and revolutionaries invade and destroy Vector, Gestahl feigns sorrow for the Empire's evils, and to gain the trust of the protagonists, Gestahl has Kefka imprisoned, citing the poisoning of Doma. Kefka later goes to Thamasa to kill the Espers congregated there, killing Leo when he tries to intervene. Using the power of the Espers, Kefka helps Gestahl raise the Espers' homeworld and create the Floating Continent, where they intend to awaken three entities known as the Warring Triad. Upon being confronted by the protagonists, Gestahl freezes them except for former Imperial general Celes, whom he orders to kill her friends to show her loyalty to the Empire. She instead stabs Kefka, who becomes enraged. Kefka and the Emperor then get in an argument as to what degree they will wield the power of the triad—the Emperor taking a more conservative approach, since he only wants enough power to rule the world, while Kefka wants to unleash the Warring Triad's full potential. The Emperor tries and fails to kill Kefka, who retaliates by having the Warring Triad strike Gestahl down and unceremoniously boots him off the Floating Continent to his death. Kefka then moves the statues of the Warring Triad out of balance, unleashing enough raw magical energy to reshape the face of the planet into the World of Ruin and bringing about the second act of the game.

Imbued with the power of the statues, Kefka becomes the god of his newly created world, using the statues to forge a massive tower of debris to serve as his headquarters, named Kefka's Tower. Kefka smites the millions who refuse to worship him with his Light of Judgment, although he implies before fighting the Returners that he largely used the Light of Judgment on everyone for his own amusement regardless of whether they worshiped him or not. Confronted by the protagonists at the game's conclusion, Kefka reveals his nihilistic motivations: when the protagonists reject his claims, Kefka goes berserk and proclaims his desire to eradicate everything. Upon the defeat of his minions, Kefka reveals his godlike form and, after uttering one final nihilistic vision of life, dreams and hope, attacks the protagonists before he is ultimately slain, causing the power of magic to vanish.

In Dissidia Final Fantasy, Kefka is the villain representing Final Fantasy VI, putting him on the side of Chaos. During the Destiny Odyssey sequence, Kefka allies himself with the Cloud of Darkness to bring Terra to their side because of her Esper powers, hoping to use the girl for his own scheme to destroy everything. However, when Terra refuses to aid him and learned to control her powers, Kefka attempts to kill her and ends up being defeated with Terra gaining her crystal. During the Shade Impulse sequence, after mocking the heroes as they almost faded, Kefka breaks his ties to the other villains and starts his own scheme to become the ruler of the ruined world before being ultimately dispatched for good.

Kefka, along with the rest of Dissidia Final Fantasy's cast, returns in Dissidia 012 Final Fantasy. Holding control over Terra's mind, Kefka uses her to fight until Kuja weakens his spell, allowing Terra to resist him. Vaan finds Kefka torturing her and helps Terra escape, Kefka's spell eventually breaking as they leave him behind. Kefka later confronts the heroes with other Warriors of Chaos to stop them from closing the portal the Manikins are emerging from, but is defeated by Vaan.