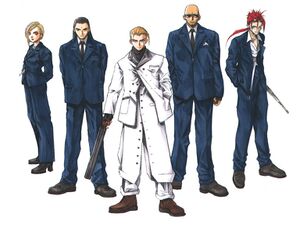 Rufus Shinra with the Turks (left to right): Elena, Tseng, Rude, and Reno

The Turks (タークス, Tākusu) is the unofficial nickname of the Investigation Division of the General Affairs Department of the Shinra Electric Power Company (神羅電気動力株式会社総務部調査課, Shinra Denki Dōryoku Kabushiki-gaisha Sōmubu Chōsaka), mistranslated as the Department of Administrative Research in the English localization. They perform covert operations on behalf of the company, including espionage, kidnappings and assassinations. They also scout for potential candidates for Shinra's elite military unit, SOLDIER, and serve as bodyguards for the Shinra executives. Within the game, they serve as recurring antagonists throughout, although they are not above forming temporary alliances with AVALANCHE. The Turks consist of four members: Tseng, Elena, Reno, and Rude. Former members include Verdot, Vincent Valentine, and Shisune.

The Turks also appear in Final Fantasy VII Advent Children, set two years after the original. Here, they serve as allies of AVALANCHE and bodyguards to Rufus Shinra and aid in his self-appointed mission to restore the world's vitality.