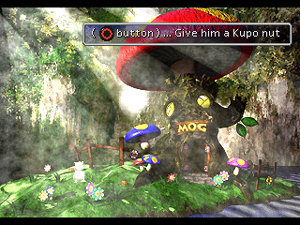 Mog House (モグ・はうす, Mogu Hausu?) is a simple minigame featured in the Wonder Square portion of the Gold Saucer in Final Fantasy VII. It is played from a large arcade cabinet on the second floor, to the very right. The arcade cabinet is made in the likeness of a Mog, and has a screen placed within Mog's mouth. It costs 100 gil to play Mog House.

The minigame stars a Mog, who lives in a house in Mog Forest. He has reached pipapopupo years old (the equivalent of 28 in human years), which is the age in which he must learn to fly to find a mate. In order for Mog to fly, the player must feed him Kupo Nuts. If Mog is fed too many Kupo Nuts, he falls as he attempts to fly, and if Mog is fed too little, he is unsuccessful at taking off. The player can tell how many Kupo Nuts to feed Mog by judging his reactions. If Mog needs another nut, his tummy rumbles. Mog must be fed a total of five Kupo Nuts. By doing so, Mog makes a unique squeaking noise, and he then takes off successfully and meets a female Moogle named Mag.

Mog must be fed three more Kupo Nuts so that he can fly again to impress Mag. The game ends with the two having many children. Mog House does not offer any direct reward, but if the minigame is completed, the party can talk to a man standing by the Mog House, who gives them 30 GP.