Midgar is a city and the de-facto capital of Gaia in Final Fantasy VII. It is a bustling metropolis occupied and controlled by the Shinra Electric Power Company. The city is powered by electricity drawn from eight Mako Reactors, which are powered by Mako energy, the processed form of spiritual energy forcibly extracted by Shinra from beneath the surface of Gaia. Midgar is often a threat to the well-being of Gaia, as the city's abundant use of Mako energy drains the life out of the planet, causing various areas to become barren wastelands. In Final Fantasy VII and the greater Compilation of Final Fantasy VII, Midgar and its reactors are frequently targeted by an eco-terrorist group named AVALANCHE, who seeks to stop Shinra from draining the life out of Gaia.

Midgar was once a collection of several smaller, independent towns. Eventually, the settlements consolidated to form the larger city of Midgar; each town formed one sector and gradually lost its original name. Midgar is essentially made of two distinct cities both spanning roughly seven miles across; The upper plate city is constructed in a massive circular design made mostly of metal, while the polluted ground level (known as the slums) lies directly beneath. The plate possesses eight towering Mako Reactors along its circumference, which feed power to the upper and lower towns. The slums are an unsanitary place to live, and are inhabited by the poorer residents of Midgar, many of whom are malnourished and unhealthy. Shinra does little to aid the citizens who live in these conditions, instead favoring those rich enough to live on the upper level (called "the upper plate").

At some point in its history, the Shinra Company went to war with the nation of Wutai. Shinra manufactured weaponry at this time, and developed a means of mass-producing materia, small spheres that allow one to use magical abilities, as well as an army of elite military units called SOLDIER. With the development of these two assets, Shinra quickly brought the war — which had lasted several years — to an end. In the wake of the war, the public became extremely dependent on the Shinra Company for its materia and the Mako they provided for electricity. At one point, Shinra had also developed a space exploration program, but after the war and the realization of just how profitable Mako Energy could be, Shinra shifted its focus towards manufacturing it and conducting research upon mako technologies, cancelling their space program and consolidating their operations.

In Final Fantasy VII, Midgar serves as the setting in the earlier parts of Disc 1. It became embroiled in a civil war against AVALANCHE who, with the assistance of Cloud Strife, engineered successful bombing missions that temporarily put two Mako Reactors out of commission. In retaliation, a Turks member named Reno destroyed the pillar holding up the section of the upper plate above the Sector 7 slums. As a result, the plate crashed into the slums below, killing many of its residents. Shinra executives, hoping that all members of AVALANCHE would be killed in the calamity, blamed the incident on AVALANCHE in order to sway public opinion against them.

Following the capture of Cloud and his friends by Shinra during their raid on Shinra Building, President Shinra reveals his desire to discover the supposed Promised Land, where they would build Neo Midgar, a reimagining of Midgar. Shinra claimed this land would be so abundant in Mako to such an extent that it would flow out of the ground of its own accord without the need for Mako reactors to siphon it, which would, in turn, increase Shinra's profits exponentially.

Some time later, Shinra moved a large Mako-powered cannon from a military installation in Junon to Midgar and modified it into a new weapon called the Sister Ray through its integration with the city's Mako reactor network. Their intent was to use the reactors to destroy an energy barrier that Sephiroth had conjured to protect himself. The cannon succeeds, but a simultaneous attack by the rampaging Diamond Weapon damaged some areas of Midgar and the upper floors of the Shinra Building. At the same time, Cloud's party infiltrate Midgar, where they kill several of the remaining Shinra executives and disable the Sister Ray, which was on the verge of destroying the entirety of Midgar due to a power overload incited by Professor Hojo, the head of Shinra's Science Department.

In the ending cutscene, it is revealed that the Meteor summoned by Sephiroth is descending toward Midgar, but it is stopped by the combined effort of a Holy spell summoned by Aerith and the Planet's Lifestream.

In a post-credits scene set 500 years later, Midgar is shown to be abandoned and overgrown with greenery, and is overlooked by Red XIII and one of his cubs.

In Final Fantasy VII: Advent Children, as a result of Meteor's effects, Midgar is mostly left in ruins, and the Mako leaks made the place uninhabitable. The survivors used the remains of Midgar to build a city called Edge, located in the outskirts of Midgar. A lot of the populace suffered from an outbreak of a disease called Geostigma. Cloud later fights Kadaj, and later Sephiroth, in the ruins of the Shinra Building.

In Before Crisis: Final Fantasy VII, Midgar experiences an insurgency waged by an earlier iteration of AVALANCHE. The story follows a number of Turk operatives working with Shinra's armed forces to combat the threat. In one instance, Midgar is nearly destroyed in its entirety by the large cannon stationed at Junon, which AVALANCHE had temporarily seized. Eventually, this original incarnation of AVALANCHE was crushed and its name taken up by a new group that only consisted of a handful of operatives.

In Dirge of Cerberus: Final Fantasy VII, it is revealed that while Reeve Tuesti, Yuffie Kisaragi, Vincent Valentine and the Turks managed to evacuate the populace of the upper plate to Midgar's slum sectors prior to the ending of Final Fantasy VII, storms spawned by the intense gravity generated between Meteor and the Planet tore apart much of the city's upper plates. Trapped deep underground in Midgar by the effects of the Meteor crisis, Midgar becomes a battlefield as the World Restoration Organization led by Reeve engage the Deepground forces, who were developed as an experimental military project by President Shinra prior to his death.

Deepground summons the ultimate Weapon, Omega, but using the power of Chaos, Vincent manages to defeat it before the world is drained of all life.

The entirety of Final Fantasy VII Remake takes place within Midgar. The narrative covers the beginning of the original game to the escape from Midgar by the surviving members of AVALANCHE and their allies, plus with expanded story content. The setting of Midgar is noted for its linear nature. While the upper plate regions were mostly inaccessible in the original game, Final Fantasy VII Remake allows many of these areas to be explored and for the party to interact extensively with its residents through new story scenarios. 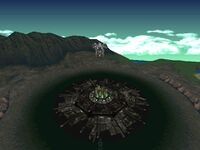 An aerial view of Midgar from Final Fantasy VII

The city of Midgar was comprised of two principal components: an elevated, circular plate supported by both a central pillar and a system of smaller columns, as well as a network of slums beneath the plate. The upper plate was essentially the "true" Midgar, containing office buildings and similar complexes, as well as theatres, bars and various residences. The plate itself was divided into eight sectors, with each sector punctuated by two walls and a mako reactor. The city's prosperity was due to the abundance of Mako Energy in the vicinity, and the reactor complex meant that there were — with few exceptions — no vegetation within the city or in close proximity to it. A commuter railway system carried workers to and from the slums, and security measures were implemented throughout the city. The Shinra Company's massive headquarters was located in the middle of the upper plate, and served as the tallest structure in the city. The upper plate remained incomplete for the entirety of its history; neither Sector 6 nor any outer sectors were ever completed, nor were they intended to be after the destruction of Sector 7. A network of maintenance platforms were suspended beneath the plate.

In the sections below the plate lived the destitute citizens in their slum dwellings. The majority of the buildings there were made of collected scrap shaped into dwellings; few of the buildings displayed any thorough architectural planning. There were, however, scattered buildings that were presumably left behind from before the plate's construction. The slums beneath Sector 6, however, were comparatively wealthy, possessing bars, clubs and the mansion of famous slum dilettante, Don Corneo. The slums as a whole were strewn with strange wreckage, including pillars of Greco-roman design, and components of a dismembered mecha.

News in the city of Midgar was covered by the official Shinra news service, the SIN.

There are several locations seen in Final Fantasy VII and its spin-offs. The Sector 5 slums are home of Aerith Gainsborough and her adopted mother, Elmyra. The nearby church tended by Aerith was the only place in Midgar — aside from Aerith's home — to feature flowers. The church was damaged after Cloud Strife fell from the Number 5 Reactor and crashed through its roof and on to the flowers.

The Sector 6 slums are a broken-down passageway between Sector 5 and Sector 7. It housed an old playground — severely damaged when Sector 7 collapsed — that Aerith once liked to visit, as well as the Wall Market area. Wall Market is the largest and most populated area of Sector 6, and also a de facto red light district. Several shops, inns, and restaurants were located here, along with the famous Honeybee Inn and Don Corneo's Mansion. This is the area where Cloud's well known cross-dressing incident took place.

In the Sector 7 Slums, AVALANCHE resided in a bar run by Tifa Lockhart that she called 7th Heaven. Sector 7 is eventually destroyed by the Shinra when they destroy the pillar that supported its section of the upper plate. Inside Sector 7 slums is the Train Graveyard, a dark and dangerous area of scrapped trains resembling a maze.

The name derives from Norse mythology, in which Midgard is one of the Nine Worlds. In the mythology, it was the home of mankind, as set aside at the time of Creation.