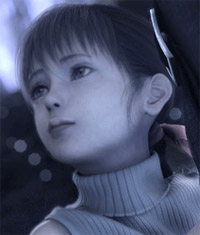 Marlene is a non-playable character in Final Fantasy VII. In the storyline of the game, Marlene is four years old. She takes it upon herself to care for Tifa's 7th Heaven bar when Tifa joins Cloud and Barret on an AVALANCHE mission. She considers Barret to be her father, while she is actually the daughter of Dyne and Eleanor, childhood friends of Barret's. Barret had taken Marlene in as his own daughter after his friend Dyne, his hometown, and loved ones were destroyed by Shinra troops. As Marlene was less than a year old when her hometown, Corel, was burned to the ground and her mother was killed, she has no memory of her biological parents. This fact prompted her father Dyne to commit suicide rather than try to adopt her away from Barret.

Later, Aeris gives herself to the Turks in exchange for Marlene's safety. Marlene is later held ransom by Cait Sith, a Shinra spy, to force Cloud to cooperate with him on their journey to the Temple of the Ancients. Marlene is later left with Elmyra, Aeris's adoptive mom.

Marlene reappears in the CGI movie Final Fantasy VII: Advent Children. Unlike many of the other children, she is unaffected by Geostigma disease.