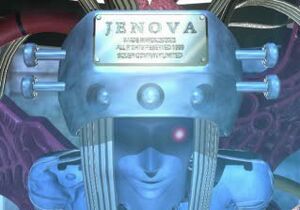 Jenova's appearance in an FMV sequence of Final Fantasy VII

Jenova (ジェノバ, Jenoba?) is an extraterrestrial humanoid lifeform who appears as one of the main villains in Final Fantasy VII. She is composed of cells that carry her will and power even when separated. Sephiroth was artificially produced as a result of the Jenova Project, in which he was fused with Jenova's cells. Furthermore, Jenova's cells can change their form and appearance. Throughout their adventure, the party fights four different forms of Jenova, in order of Jenova-BIRTH, Jenova-LIFE, Jenova-DEATH, and lastly Jenova-SYNTHESIS.

According to the Jenova Project reports found in the basement of the Shinra Mansion in Nibelheim and records kept at a research station near Icicle Inn, Jenova traveled through space as a meteor and crash-landed on the Planet about two thousand years ago, during the time of the Ancients (also known as the Cetra). Jenova's landing created a giant wound to the Planet that would later be called the North Crater, a blight on its surface to which the Planet would channel its Lifestream in an effort to heal. Upon arriving, Jenova emerged from the Crater and approached the Cetra (also known as "the Ancients"). At first, Jenova appeared to the Ancients as a peaceful friend, but would then use her psionic abilities to glean the memories and emotions of the Cetra from their minds. Jenova would then shift her form in response, assuming the appearances of their deceased loved ones. This way, Jenova could get close enough to the Cetra and infect them with her virus, causing the victim to have Geostigma. Jenova would then turn them into monsters under her control. The infected would then spread their cells to infect more victims, thus extending Jenova's influence in an attempt to infect and kill off everyone on the Planet.

Most of the Cetra were mutated in the time that followed, though the survivors attempted to defend the Planet despite their dwindling numbers. They were abandoned in the defense of the Planet by the regular humans (those descended from the Cetra who gave up their Planet-revering lifestyle and subsequently lost their close relationship with the Planet), though a small band of survivors mounted an assault on the Calamity from the Skies and managed to defeat Jenova nonetheless. Now effectively neutralized, the creature was sealed away in the Northern Crater. As a result of Jenova's onslaught, only a few Cetra would survive into the modern era.

Approximately 30 years before the main events of the game began, Professor Gast excavated the creature, named it Jenova and mistook it for being a Cetra. Since Gast was Shinra's top scientist, the Jenova Project was approved under his guidance and conducted in Nibelheim. The project intended to produce in the modern era an individual with the abilities of the Cetra, which could then be used by Shinra as enhanced super-warriors, who later formed the basis for SOLDIER. Ultimately that would result in the birth of Sephiroth, child to Gast's assistants (Professor Hojo and Lucrecia), and inheritor of Jenova's power. Some time after the birth of Sephiroth, Ifalna, one of the last Cetra, informed Gast that Jenova was not an Ancient, and Gast fled from Shinra in regret of what he had done. However, Hojo continued Gast's research and would later use it to augment select candidates for becoming members of SOLDIER.

Only 5 years before the start of the game, Sephiroth would learn of the Jenova Project and read the flawed reports identifying Jenova as an Ancient. Further, he would misinterpret them as stating that he was produced from Jenova's genetic material. Believing himself to be the sole survivor of a race abandoned to a sacrificial death by the species that currently dominated the Planet, he lashed out in rage, razing the village of Nibelheim and slaughtering most of its citizens in his blind wrath. He then attempted to retrieve the remains of Jenova from the nearby Mako Reactor, but due to the interference of Zack Fair and Cloud Strife, only managed to escape with Jenova's head, retreating with it into the Lifestream. In the time that followed, Sephiroth would gain mastery over Jenova's powers, essentially acting as an evolved form of the creature. Its own mind — that of an instinctual creature seeking to destroy — ceased to operate and the will of Sephiroth assumed control.

After drifting through the Lifestream, Sephiroth arrived at the site of Jenova's impact. While in the Lifestream, he had absorbed the knowledge of the Cetra and now set in motion a simple yet devastating plan: scarring the Planet, so that when it healed, he would be situated in the middle of the wound, where he could absorb the Lifestream's energy and then be reborn as a "god" who could control the Planet's lifecycle. Jenova's body was moved to the Shinra Headquarters in Midgar, where it remained until the events of Final Fantasy VII.

During the events of Final Fantasy VII, when Cloud and the party are in the Shinra Headquarters, Sephiroth managed to take control of Jenova's body and broke her out from her container. He proceeded to murder President Shinra along with a multitude of the Shinra personnel.

Jenova is seen twice before the characters actually fight her. Her full form is first revealed in a flashback, during when Cloud tells the party about his past in Kalm's inn. Jenova is seen preserved in liquid in a large glass tank in the Mt. Nibel Mako Reactor. Sephiroth rips away the statue (breaking her right wing), and lights in room turn on, showing Jenova's true look: a feminine, yet somewhat grotesque humanoid creature. Jenova is also seen in Midgar, in Shinra building; this time as a barely recognisable headless corpse in a tank.

En route from Junon to Costa del Sol aboard the Cargo Ship, an intruder alert is raised because someone has killed many aboard the ship. Upon entering the cargo hold, the characters see an apparition of Sephiroth rising through the floor, and then have to face Jenova-BIRTH. The monstrous forms of Jenova are quite large, and vaguely humanoid-shape, though they have no distinct arms, only large appendages that look vaguely like wings, and the "legs" are a single skirt-like mass.

Sephiroth kills Aerith in the Forgotten City. He talks to grieving Cloud for a while, and as he flies off, Jenova-LIFE appears. This form of Jenova uses water attacks.

The third form, Jenova-DEATH, is found from the site of the Reunion - Whirlwind Maze. Her attacks are now fire-based.

In the time immediately following Sephiroth's departure into the Lifestream, Hojo, believing Sephiroth to be dead, began experimenting on other humans, specifically the survivors of the Nibelheim massacre. Injected with Jenova cells and showered with mako, the results of the experiment were known as "Sephiroth clones." (The Sephiroth clones were not genetic copies of Sephiroth, but rather humans augmented with a similar procedure to that which produced Sephiroth.) Hojo's experiments here were presumably to test the Jenova Reunion Theory and refine the process for creating members of SOLDIER.

The last form is found in the depths of the North Crater, as the characters are heading to kill Sephiroth for good. Jenova-SYNTHESIS looks different from the three other forms; there's now a single, smaller feminine form, with a large, hollow spherical fleshy shell behind her, and two tentacles in front. At certain point of the battle, Jenova will start a countdown from 5; if the countdown reaches zero before the characters kill Jenova, she casts Ultima. If the party survives this attack, the battle ends in their favor.

In Final Fantasy VII Advent Children, Jenova's last remains are acquired by Rufus and three "remnants" of Sephiroth, who call themselves "Jenova's children", attempted a new Reunion that would allow Sephiroth to be reborn. To accomplish that, they sought out what remained of Jenova's head. Lacking Jenova cells, they couldn't sense her location on their own. However, those with Geostigma could. So Kadaj, the leader of the three, used his will to take down the body defenses of the children Yazoo abducted and turned them into "bloodhounds". When Kadaj absorbed the remains of Jenova's neck, the cells reconstructed him into a new body for Sephiroth. Like in Final Fantasy VII, both Sephiroth and Jenova have the goal of taking control of the Planet. In the climax, Sephiroth battled with Cloud once again and was again defeated.

Jenova appears as a human-like, nude, blue-skinned woman preserved inside of a glass tank filled with liquid. In Final Fantasy VII, during an FMV cutscene in Mt. Nibel's Mako Reactor, she is wearing a helmet that exposes her brain at the top and, in the front, bears a plaque inscribed with the word "JENOVA" and an inscription.

The inscription on Jenova's helmet is different throughout her appearances. In Final Fantasy VII, it reads "Made in Hong Kong; All rights reserved 1996; Squer Company Limited". The text is too small to read in the game, although a higher quality version of the cutscene is featured in the intro of "Distance", a "the making of" featurette on the Final Fantasy VII: Advent Children DVD, allowed the text to become visible. In Final Fantasy VII: Advent Children, the plaque is inscribed with the dates of Jenova's discovery and concealment to her container. In Last Order: Final Fantasy VII, the plaque reads, "Strict secrecy; Scientific inquiry section; Shinra Company Limited". The word "JENOVA" and her placement are the only consistent markings on the plaque throughout her appearances.

Jenova's original forms during Final Fantasy VII's development were very different from her final incarnation; the original Jenova was a hostile region of the brain that would awake in people possessing certain genes. The name "Jenova" was to have been inherited by a book written by the Cetra on the subject.[1]

Jenova is often referred to as a "she", although the character's gender is not definitively confirmed. Furthermore, through Ifalna's description of Jenova's approach to the Cetra and Sephiroth's statements concerning—and his use of—Jenova's abilities, it is known that Jenova's cells can change their form, even from male to female appearance. Furthermore, Ifalna calls Jenova a "he" in the PlayStation version, but uses the pronoun "it" in the PC version. This concept is also confirmed by the Final Fantasy VII Ultimania Ω guide.

Jenova's name has long been speculated to be a portmanteau of "Jehovah" and "nova," the Hebrew name of God and the Latin word for "new." Jenova is trying to make herself the "new god" of this world, an ambition she passes on to her "son," Sephiroth.[citation needed]

The Final Fantasy VII: Advent Children Soundtrack includes a heavy metal arrangement of the J-E-N-O-V-A track, which plays during the final battle between Cloud and Kadaj, and the Black Mages recorded another heavy-metal version of the song, featured on their first album. A piano arrangement was included on Piano Collections Final Fantasy VII.