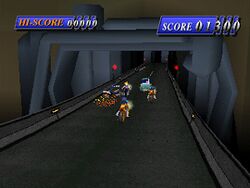 G Bike (Ｇバイク, G Baiku?) is a racing minigame that Cloud can play on the second floor of Wonder Square in the Gold Saucer in Final Fantasy VII. The minigame is designed after the motorcycle chase scene that took place earlier in Midgar Highway. On the arcade cabinet, the game is named G-Bike. It costs 200 gil to play G Bike each time.

There are actually two G Bike cabinets, both of which are red. A random NPC is playing on the left G Bike cabinet. If talked to, he shouts "BAM" a few times, stating that he has the urge to do while playing.

In 2014, a remake of the minigame (or the event from which it was inspired), Final Fantasy VII G-Bike, was released on iOS and Android devices, but was closed the following year.

G Bike mostly plays the same as the Midgar Highway motorcycle chase event from earlier in the game, but with an added score to make it more like an arcade title. Another big difference is that character health bars do not appear on screen. During G Bike, Cloud rides the Hardy-Daytona on Midgar Highway after the truck. He must use his Buster Sword to slash Shinra Bikers left and right of him to stop them from ramming into the truck. Cloud earns 500 points each time he hits an enemy, although he loses 25 points each time the truck is hit.

There are two types of Shinra Bikers, named Orange Bikers and Red Bikers respectively, and their behaviors are slightly different. Orange Bikers simply appear to try and hit the truck, but the Red Bikers have the added behavior of trying to avoid Cloud, which may prompt him to drive away from the truck. This gives other Shinra Bikers the opportunity to attack the truck.

Upon completing the minigame, if Cloud gets a new hi-score, it is updated. The hi-score (which defaults to 0 points) has a display shown at the top-left corner of the screen, but the score itself is shown to the top-right and appears slightly larger than the hi-score display. There are three different prizes that can be won for completing the minigame: 2 gil (if Cloud scores between 5,000-10,000 points), 10 gil (if Cloud scores at least 10,000 points) and Speed Source if it is Cloud's first time surpassing 10,000 points.