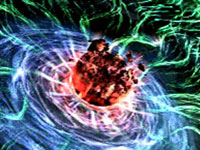 The Lifestream is also considered to be a swell of souls, a river of the dead's memories. Indeed, the lifestream is in fact the sum of all living things on the Planet. In the game's universe, each new life (of plants, animals, and human beings) is "blessed" with spiritual energy from the Lifestream prior to birth. Upon the death of an organism, its spiritual energy returns to the Lifestream, taking back with it the memories of its lifetime, and allowing the Lifestream as a whole to grow and the cycle to continue. Interestingly, the Lifestream is described in mystical terms, but also in scientific terms as well. It may be thought of as the ethereal equivalent of uranium, since it is extracted and processed, creating Mako energy for electricity, and also forming into Materia at times. However, it may also be considered an allegory for oil (which is shown to exist on the planet in the film Final Fantasy VII: Advent Children). In the game it is described as being removed from the planet by reactors, used up, and then ceasing to be, a process that would eventually lead to the death of the Planet.