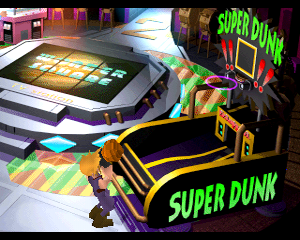 The Basketball Game is a simple basketball minigame played on the first floor of Wonder Square in Gold Saucer in Final Fantasy VII. On the machine, the game is titled Super Dunk. It costs 200 gil to play.

The Basketball Game is simply a free throw minigame in which Cloud has to throw a basketball into the hoop as many times within the time limit. The player must hold

in the Nintendo Switch version) for Cloud to charge his shot and then release it for him to throw the ball. Cloud earns one gil for each successful shot. Cloud can always make a successful shot if he throws the basketball once it touches Cloud's hair and he stops moving.

If Cloud gets 10 shots in a row (earning him a total of 10 gil), he is offered a Double Chance, in which the gil amount is doubled for every shot. This can be further doubled if Cloud reaches 30, 70, or 150 gil respectively. The game forcefully ends when Cloud earns 300 gil (the equivalent to 44 successful throws).