Artwork of Cid for Chocobo Racing

Cid, also named Uncle Cid,[1] is a character and a main ally of Chocobo in both Chocobo's Dungeon 2 and Chocobo Racing. Like many other Cids in the Final Fantasy franchise, he is an inventor. Cid is one of two Cids that appear in the Chocobo series. Starting with Final Fantasy Fables: Chocobo Tales, he was replaced by a different Cid. 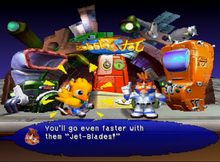 In Chocobo Racing, Cid is the narrator of Story Mode, in which he also has a prominent role during the first two chapters. Cid also has his own course, Cid's Test Track, usable in each mode.

In Chapter 1: Gadgets a go-go! of Story Mode, it starts with Chocobo going to Cid's lab. Cid invites him inside, where he gives Chocobo a pair of Jet-Blades. He offers Chocobo to race around his racetrack. They go back outside, and while Chocobo is at the start of the race track, Cid provides him the basic instructions for racing. Once Chocobo completes three laps around the race course, a cutscene is shown of Cid holding a blue stopwatch as Chocobo dashes across the finish line. Just as Cid stops the timer, Mog appears, and he asks Cid if he finished making him something as well. Cid suddenly becomes anxious because he forgot to make Mog a vehicle too. Cid tells Mog that his vehicle will be ready by tomorrow. Mog, wanting to take the spotlight from Chocobo, asks Cid again if he has finished a vehicle yet, to which Cid responds that he is adding the finishing touches. The chapter ends with Cid admitting to Chocobo that he forgot to create a vehicle for Mog and says again that he will make one tomorrow.

In Chapter 2: Moogling Right Along!, Cid fulfilled his promise and made Mog a vehicle, the Mog-Scooter. Mog is unimpressed because it is not the racing vehicle that he was expecting. Cid tells him to stop griping because he made the vehicle especially for him, and says that it even has a honking horn. After losing to a race against Chocobo, Mog asks Cid if he skimped his vehicle, which Cid denies. He explains that Chocobo has a Blue Crystal that grants him the ability to move very fast. Cid tells Mog that people from all over the world have different abilities. He then suggests for Chocobo and Mog to go on an adventure to discover the true meaning of the Blue Crystals. The chapter ends with Cid waving goodbye to the two of them as they begin their journey. From this point on, Cid serves as the narrator, and talks at the end of each chapter.

During races, Cid acts as a mechanic for any racer who falls off the course, and repairs their vehicle so that they can continue racing. This is similar to Fishin' Lakitu's role in the Mario Kart series.

Cid is the only character in Story Mode who does not participate in any race. However, Cid can be unlocked as a playable character by clearing Story Mode a third time. As a racer, Cid rides in his tank, which is even listed as Cid's Tank on the character selection menu.

In the game's manual, Cid provides a few pieces of gameplay advice. He even has his own dedicated section on pages 20 and 21 titled, "Uncle Cid's Advice".

Cid is generally depicted with having brown hair, which sticks up at the front, and both his eyebrows and mustache are thick and brown. Cid mainly wears a dark red jacket, white gloves, green pants and brown shoes. He also wears a pair of goggles on his head. In Chocobo Racing, Cid's hair, eyebrows, and mustache are all red. He wears a white-and-blue lab suit and a black belt. His goggles were changed to blue with a red outline. Cid speaks with an accent similar to that of Southern American English.

"A passionate engineer with dreams of greatness.

A talented, well-known creator, he and his vehicle inventions may assist Chocobo during the journey."

"Howdy folks! Let me explain a bit about this game’s save data. It’s pretty darn important, so listen up! There are two types of data used in this game: the general “System Data” and each course’s “Best Race Data.” You can see these on yer PlayStation game console MEMORY CARD Screen. The ones that look like lil’ Mogs are yer “Best Data” that record how you ran yer fastest race on each course. The one that looks like good ol’ Chocobo is the game’s “System Data” that contains where we finished readin’ the Story Mode, yer best scores and so on. The “System Data” also stores up to 10 of yer very own customized racers! Ain’t that just dandy!?"

"Listen here! The key to gettin’ the best time in this here Time Attack Mode is to beat that darn “Phantom Racer” varmint! ‘Cause it’s the best time you’ve raced so far, it may be hard to beat it, but it will at least serve as a goal to aim for. An even better way to improve your racin’ is to git someone who’s way better than you to save their best play data on one of them MEMORY CARD gadgets. That way you can try to beat them by copyin’ their racin’ style. Oh, and here’s a warnin’ fer ya, kid! If yer best race data is longer than 5 doggone minutes, then ya can’t save it, so get a move along, all you slowpokes!"

Don’t dawdle, kid! Take the lead straight from the startin’ line with a “DASH START!"

"Y’all know that leadin’ the race from the beginnin’ to the end is the ideal way to win, don’t ya? This could be kinda hard to do, but hey, don’t be sayin’ ‘that’s impossible’ now! So long as ya know how to do a DASH START, it’ll be reeeel easy to take the lead in all of yer races! This is what ya gotta do: Look and listen to the three red ‘Bomb’ signals as they appear. Git to know their timin’ so ya can tell when the forth count sounds and the ‘Bombs’ explode. Just as they’re ‘bout to blow, press the Accelerator (

button). By doin’ this you can fly off the startin’ line, leaving all yer rivals way behind ya! It might take a bit of practice, but it sure is worth it!"

Now for the secret to creatin’ the best racer! "Ya don’ wanna just mosey on through the Story Mode. Y’all should try to git as high a score as ya can! That way you'll have more points to use in the Edit Parameters Mode when ya build yer own racer. The number of points ya git depends on how ya run in the races. The less attempts ya need to win each race, and the quicker ya clear each course, means higher points at the end. On the other hand, you’ll lose points each time ya restart, and fer taking too long to finish a race. So try not to bump into anythin’ cause that’ll slow ya down! The more times ya try, the faster you’ll become, and the better the racer you’ll be able to make! Oh, and ya may just meet a few new friends along the way!"

If ya master all the courses in Grand Prix Mode, new classes of racin’ will appear!

"In GP Mode, the aim is to git the highest point tally by racin’ on four courses. The points ya git for each race depends upon ya rankin’. But here’s a secret I bet ya didn’t know! When ya git first place in a race, you’ll be awarded a ‘crown’ for that course that you’ll be able to see on the Select Course Screen. If ya collect all the crowns from every course, you might just progress from CHOCOBO CLASS to BEHEMOTH CLASS - a harder level of racin’! You should only try the new class when yer really confident in yer racing skills. And what’s more, after ya come in first in all the courses for this class... Oops! I better not ruin the surprise for ya!"

Finally, a super technique that makes spin-outs a plus!

"When ya spin out from driftin’ too much, you lose precious time, right? Well, here’s a secret that makes such little mishaps good fer ya: Let go of both the Accelerator (

button) when ya start spinnin’. Then press the Accelerator (

button) again while yer still spinning around. This’ll make ya do a SPIN DASH! But you’ll have to time when you press the Accelerator (

button) carefully if ya wanna dash in the right direction!"

"There are other courses that aren’t listed here! “Starting with the test track designed by yours truuuly, we’ve just introduced a total of eight courses. But this don’t mean that’s all there is, folks! I’m telling ya that there could be more to find even after you’ve finished the game once or twice! So keep on racin’, pardners!”"