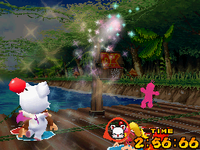 Moogle performing a Moogle Dance in Mario Hoops 3-on-3

In Mario Hoops 3-on-3, Moogle Dance appears as Moogle's Special Shot. The player can have him perform it by tapping out the letter M twice.

Moogle initiates the shot by bouncing on the ball five times. It then rolls around in a circle on the ball twice. Then, it casts the ball, now glowing white, toward the basket. When the ball goes in, multicolored fireworks appear. If shot outside the three-point line, the visuals do not change, although a teammate needs to catch the ball and complete the dunk.